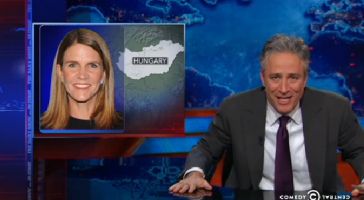 This week, it seems that pop culture just couldn’t steer away from the appointment by the U.S. Senate of The Bold and the Beautiful producer, Colleen Bell (wife of B&B’s Brad Bell) as the U.S. Ambassador to Hungary.

Citing her non-qualifications, and fundraising efforts , the press that covers politics in Washington certainly fired away at White House Press Secretary Josh Earnest, who defended the appointment of Bell in a press conference with reporters earlier this week.

Earnest said to ABC’s Jonathan Karl, senior congressional reporter, who was not enthused over the appointment, “As it relates to Ambassador Bell, she had the President’s confidence that she will represent the United States and maintain the important relationship the United States has with the government and the people of Hungary.”  He goes on to say that Colleen about her qualifications, “She has had her own private sector career and obviously someone who had succeeded in the business world.”

When the reporter fires back that Bell helped raise hundreds of thousands of dollars for President Obama’s re-election campaign, which may have been one of the main reasons she was given the post, Press Secretary Earnest says: “I was not involved in this decision making process, but I can tell you the reason that she was chosen was that the president has complete confidence in her ability to represent the United States in that country.”  Meanwhile on TV in his own send-up of the Bell appointment, Jon Stewart of The Daily Show with Jon Stewart said he felt sorry for the press secretary who has the worst job in our nations capital, stating, “How much does that guy (Secretary Earnest) just want to reach over and tag out?” Stewart said Wednesday night, after playing a clip from the press conference.  “That is the greatest thing I have ever seen the president’s press secretary do,” Stewart said. “His entire job — his only job — is built around trying not to go, ‘Hey, look, I just f**ing work here.'”

Also, host/comedian Stephen Colbert riffed on the appointment of Bell on his show The Colbert Report on Comedy Central this past Thursday night.  He even started his send-up with, “I love our nations ambassadors. What can I say, I’m an “ambassman”.   That’s why I’ve been following the senate confirmation of the U.S. Ambassador to Hungary.  The President’s nominee got a lot of attention for being a ‘Bold’ choice, but also a ‘Beautiful’ one.”   Colbert goes into a a clip package, and later goes into how producing on The Bold and the Beautiful is the perfect training ground for Bell to become the ambassador to Hungary.   He goes on to say, “Hungary is a region rife with drama and the constant threat of violence. Exactly the situation the Forrester family routinely handles from their palacious estate while simultaneously running their fashion empire.”

Watch the clips below. The first from Washington Post TV of the press conference with Press Secretary Josh Earnest, and then the segments on The Daily Show with Jon Stewart and The Colbert Report.  Then weigh-in on your thoughts to this:  Do you think Colleen is being unfairly judged by her association with the soaps, (which always people deem to poke fun at), when it appears that many appointments to ambassadorships in this country have to do with those who have contributed major funds to help in re-elections or elections?

James Franco's "Forbidden Love" Teases His Soapy Past In This Preview For Tonight's SATURDAY NIGHT LIVE!

Melissa Archer Debuts On DAYS! What Were Your First Impressions? And, A Preview For Next Week When Serena Sees Eric!

I’m with Senator McCain on this. Although President Obama isn’t the first president to hand out ambassadorships as prizes, I believe it is ill advised.

Why is there just “outrage” now? From what I believe there have been many ambassadors that have been actors, writers, (basically in show business) what is it about Colleen Bell that bothers them so much?

She admitted she had no idea what interests the USA has in Hungary. Not even sure why she wanted the appointment…a vacation maybe? Tell me how she IS qualified?

There are no real qualifications to be an ambassador. What most presidents look for is someone’s ability to at least represent U.S. interests well in the country they are going to, and be a trusted conduit for information between said country & the U.S. State Dept. Ambassadors don’t negotiate any formal deals. That’s the job the Secretary of State & POTUS. Where Bell is so lacking is that she couldn’t even do what most high school students can – which is B.S. their way through a simple Q&A. Did she even look at a friggin map of Europe? If she did, she should have been able to tell Senator McCain that U.S. interests in Hungary are to help them be strong against Russian aggression pushing westward into the former Soviet bloc territories. I mean, good God – this is basic 20th century American history – the century this woman was born in! Did she not notice ANYTHING that went on, like, oh, the fall of Russian communism. You don’t have to be a member of any party to be able to put 2+2 together. Just observant & more than a little intelligent.

She is a joke. I had to laugh when Josh Earnest spoke about her achieving great success in the private sector. She would probably be at a cashier desk in Macy’s if not for her family connections. I was surprised the reporter did not have a comeback for “chief liar” Earnest. As someone of Eastern European descent, I am offended that someone with her lack of knowledege of the significance of Eastern Europe in global affairs will be ambassador to a country of such significance.

Stephen Colbert of The Colbert Report and Jon Stewart of The Daily Show are more than awesome! And- both are right on!

ALL presidents have assigned non-qualifications persons as ambassadors to whatever countries for whatever their reasons, it is comely done..
Soaps are always made fun of and used as material for comedians and all others to ridicule with campy sarcasm…
Soaps are seen as being unintelligent wacky stuff lol so a writer/producer of a soap opera could be seen as unintelligent also to put out such nonsense..
and the congress would see a soap opera as stupid stuff and reflecting the as same of the writer/producer LOL

Appointing Bell an ambassador position is a soap opera in itself LOL ..

As a Canadian I can”t really say one way or another about her qualifications , but I got a real kick from both Jon Stewart and Colbert stating why their video cannot be seen in Canada– usually there is just some bland statement about the video not being available,so I really enjoyed the humor they injected into it. I had a good laugh.

Why is this on a board about soap operas ? I could really care less about Colleen Bell she is of no interest to me we had the discussion a few days ago about Senator McCains comments enough. Let’s quit beating a dead horse she is a woman who has a lot of money and nothing between the ears I thought we had established that. Move On!!!!

k/kay..
This is Michael Fairman site, we are his guests..
Michael can put up anything he deems interesting..
Colleen Bell is an important soap opera person and it relates to her new career..
It is appropriate imo ..
The same as any soap person and their new projects and career moves..
🙂

Yes it is and if he did not appreciate my comment he would not post it. I stand by my statements tired of hearing about CB. We discussed her appointment and we all know why she got it and bloody fine just fatigued out with this. Tired of hearing about racism, homophobia, politics just would like o escape once in a while. 🙁

And you will be glad to know I am not going to read the comments anymore it has become childish this back and forth bantering. Not very healthy.

I guess she qualifies due to B&B airing in Hungary!

I guess this was Brad Bell’s way of writing her off the show! The most creative idea he has had yet. Is he taking credit for it?

It does seem that the position was bought & even the press secretary is dismayed by this report. However that said, don’t you have to live in the country for which you are ambassador? I suppose that’s one way to have a marriage :/

READ MORE
The Bold and the Beautiful Turns 33 Today; Thanks Fans For Tuning In Each and Every Day
Continue Reading
Advertisement