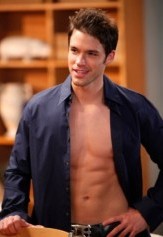 It’s that time of the years folks, when your favorite soap opera ‘hotties’ compete in soaphunks.net, Adonis competition.  In the 2010 edition, the line-up features some of your favorites regaled as soaps sexiest men.   Week two voting is underway, and continues today through Tuesday June 15, 2010.

So here are the voting rules:  go to soaphunks.net and select your one favorite hunk from Adonis 2010 finalists. The actor who receives the fewest number of votes at the end of the voting period will be eliminated from the contest.

You may vote only once per day per e-mail & IP address. (A maximum of six votes using either the same e-mail address or IP address will be counted.) Each individual ballot will be weighted as 1,000 votes.

Good-luck to all the finalists,  and may the best man win!

I want David gregory Ford to win he’s so hot and I love his character of Ford. I actually dream about him

David Gregory will probably win thanks to that bucket, his cute, boyish, twinky (gay guys know what I’m talking about) face and buff bod. But even in something as frivolous as the soap hunks “competition”, there’s a lack of diversity in daytime. At least the mid 90s had Shemar Moore. The best soap years for hunks were the mid 90s.