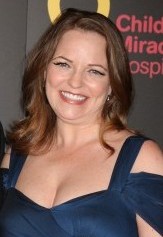 The Young and the Restless scene-stealing Tricia Cast (Nina) had been commuting from her home in Nashville to Los Angeles when she is called upon in story on the number one soap.   These days in Genoa City, Nina is trying to forge a relationship with her son, Ronan (Jeff Branson).

Now, Soap Opera Uncensored’s Nelson Branco caught up with the talented performer to get her take on working within the framework of former Y&R head writer and executive producer, Maria Arena Bell, what has happened to the Paul (Doug Davidson) and Nina romance, and if she would like to visit the bad girl side of her character again.  Here are a few excerpts from the interview below!

Tricia on if it was frustrating working with the often times fragmented storytelling of Maria Arena Bell: “I guess so. I was happier when there was a definite storyline playing out like when Ronan came on the show. It’s harder to come in for two months and remind people about the character, the story and relationships. It’s always more fun to apply yourself. You never see the end of an arc, but when there is an arc, you know there is an end — even if you don’t know what it is. Maria’s kind of storytelling is really great for a commuting schedule but, as a performer, I prefer to work more consistently. “

Tricia on if Paul and Nina are still together, since we don’t see the pairing that much on screen these days: “Yes, they are. I kind of like it because Paul and Nina are normal and not overly dramatic. There was one moment when Paul was missing Christine, which pissed off Nina, but besides that, they are normal — and more normal than Michael and Lauren who have a long marriage. Paul and Nina are less exciting — and I like that. There are no shenanigans… it’s kind of like a real relationship. Would I love to play more? Yes. But I’m not dissatisfied with the relationship right now.”

Tricia on if she would like to explore and see more of Nina’s dark side surface:  “Sure! I would embrace another facet of her personality. I trust Y&R to do what is best for the show when it comes to Nina. And I’d be happy to do it. I don’t have expectations as much for Nina as I do hope. If I were writing the story, I would bring Nina’s darker side back for a bit so she can continue her journey.”

So soapers, would you like to see Tricia have more airtime?  Do you like the Paul and Nina pairing?  Do you want Ronan and Nina to become closer?   Let us know!

Love Nina any way we can get her.

Paul and Nina are absolutely the best couple to come out of the MAB era. I LOVE them together! Tricia Cast is the only reason I’ve stuck with Y&R for the past three years.

I am torn. On one hand I like when former “bad girls” put their immature and implusive ways behind them and grown up to become accomplish, mature women, but on the other hand accomplished and mature can be dull to watch. Yet again watching a soap character make the same mistakes over and over without growth is equally dull to watch — that means you Phyllis Newman. Anyway if they keep Nina on the canvas I would like her to be the way she is now, maybe with little more spice to her, but not too much As for her… Read more »

I think Phyllis is on the road to change … finally.

Friday’s (American) episode broke my heart for Phyllis when she realized the marriage to Nick was really over and that she has serious problems with her relationship with Summer.

I really like Tricia Cast as an actress and person. She is very down-to-Earth and so is Nina.

Paul and Nina are nice and simple and supportive of one another.

I have been waiting and waiting for Nina to finally have a relationship with Ronan and I hope I finally get it. It seems only fitting after what she has been through to find him and there is so much potential for some good character development.

Tricia is an AMAZING talent who was not utilized properly during the Maria Arena Bell regime mainly because of, as Nelson Branco phrased it, fragmented storytelling – MAB was incapable of telling a decent story without veering off into another tangent, confusing viewers and the actors alike. With Jill coming back to the canvas after staying with Phillip in Australia, it would be nice to have her and Nina miz it up like they did back in the 1980s!

Tricia Cast is a godsend to Y&R and the show should keep her forever. Her character and storyline is filled with possibilities. I would love to see her with her sons again, forging bonds they did not have. I would love to see a friendship with gay Phillip, a true bond that is real and lasting. I would love to see her and Paul evolve into a longtime pair, romance along the way, and become pillars of the Genoa City show structure. She is a successful novelist and that could lead her somewhere. I find Nina much more engaging than… Read more »

I’m just reading this interview so after reading the most recent Lauralee Bell interview by Tv guide. It’s obvious that Nina needs to just move on and possibly find someone else. I would be curious to know what Nina thinks about her and Paul’s relationship now that Paul and Christine are getting back together. Michael if you chat with her again, I would love to hear her take on that.

Please show the character Nina more. Tricia Cast is great in the role! Wish they would explore more of why Ronan treats her so bad when he was kidnapped. Since Nina & Paul break up, pair her with Jack or Nick. I really miss the scenes of Heather Tom as Vicki going up against Tricia Cast Nina during the Ryan,Victoria, Nina era.