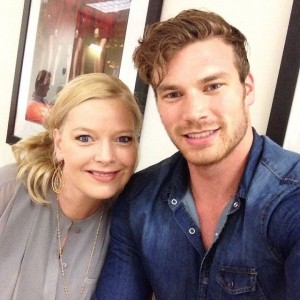 Previously, General Hospital’s Kelly Monaco (Sam) was announced as appearing in (and has taped) an episode of the hit ABC Family comedy series, Baby Daddy where she will play an amped up version of herself.  Monaco’s episode will air on February 4th!

However, there is always a twist on a twist! And according to the scoop from Entertainment Weekly, Baby Daddy stars Derek Theler and Melissa Peterman are on there way to General Hospital appearing in an upcoming episode on February 13th, just in time for Valentine’s Day!

Derek will apparently play a colleague of Dr. Patrick Drake (Jason Thompson)  In story, Patrick is called to consult on a case at the last minute, delaying his date at the Metro Court with Sam.  Derek, also happened to be stood up by his date, so he keeps Sam company, and the two discover the true meaning of Valentine’s Day.

As for Melissa, When Olivia (Lisa LoCicero) has a surprise visitor from her Bensonhurst days, Melissa Santoro Picard (Peterman), it quickly becomes clear that Olivia is upset on Valentine’s Day because she’s carrying a torch for Ned, who is not returning her interest, so Melissa sets out to give Ned a piece of her mind over the way he’s treated Olivia and is surprised to find a familiar face working at the Quartermaines!

What do you think of the Baby Daddy crossover?  Looking forward to seeing Derek and Melissa on GH? Comment below!

I like it..!!
It will be different, entertaining and most of all *fun..

(GH is truly a rolling stone )

Olova and Patrick moments, that is good!

I’ve never watched ‘BABBY DADDY’ and at first thought the crossover was going to be yet another GH baby drama…lol…but to me this will feel no different than watching day players…im fine with it!!!

i think its great maybe GH will have a crossover with pretty little liars and the fosters, i’m game, their all abc shows and great shows to boot, so let the crossovers begin.

Did Patrick and Robin even officially get divorced yet? Robin needs to come back

I’ve enjoyed watching Melissa Peterson since her days on “Reba.” I like seeing Olivia more on-screen. Lisa is bringing more comedic material to Olivia. I actually really like Olivia with Julian. Love seeing Ned more. Tracy referring to Olivia as “Mama Celeste” was classic Quartermaine banter-loved it! Tired of Johnny. Too much play-acting as a “thug.” I know the character is a Junior Mob King-Pin, but the “thugness” seems too forced to me. nuLulu could not be any more boring to me. There is no spark. No heat. Her scenes with Dante are lackluster, as are hers with Johnny-who I… Read more »

Just more proof that GH is actually a mid-level sitcom.

I’m laughing-I always say that the villains are more like caricatures and the storylines are cartoonish.

I just love Melissa Peterman and recently attended a taping of Baby Daddy. She will add some light hearted moments to the show.