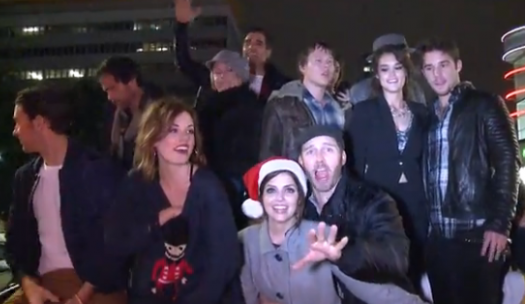 The cast of Days of our Lives was honored for its upcoming 50th anniversary season at the Hollywood Christmas Parade back on November 30th amidst one of the rainiest nights in Southern California thus far this year.

The rain didn’t stop the Salem gang from hanging out and celebrating the Tinseltown Christmas tradition as they all gathered on a double-decker bus to travel the parade route, umbrellas and all, in front of adoring fans who braved the rain to see some of their favorites from the NBC soap opera!

The Wrap just released this first look behind-the-scenes video as the DAYS cast took a cast photo, hung out in the green room, and then made their way on to the bus, and the parade route.

The Hollywood Christmas Parade will be re-broadcast on Friday, December 19 5:00 p.m. ET on Hallmark Movie Channel before airing in syndication in many CW markets throughout the United States.  In addition, Los Angeles KTLA will also air the parade in the local market Southern California area on both December 19th at 8PMPST and December 21st at 3PMPST.

Watch the cast of DAYS ride in the parade behind-the-scenes below! Then, let us know if you will be checking out the broadcast and what was your favorite moment from the video!

Rick Springfield To Appear On Season Two Of TRUE DETECTIVE!

Melissa Archer is magnificent on Days. I have seen her since before she “came out” as Vickie’s daughter, Natalie, on OLTL. She is not only beautiful and talented, but strong and charming She is destined to become a leading lady on DOOL. Thank you.

It literally rained on their parade, but they had fun anyway!!!

the one’s that popped out first

Paul makes it to reel. Thank you for accepting this show… you are ON

We need the rain… FILL all our reservoir
my thoughts are with : that we take hold of all our need… godspeed

Suddenly this week the show became enjoyable to me again. They’re moving the stories along a bit faster and the new additions to the cast are injecting some freshness.

Seeing the cast in the parade is a lot of fun! From the vets to the newcomers it seems like a fun group!

Were they in a Scientology building at the beginning? If you look closely, all of the books on the shelves behind them were by L. Ron Hubbard.

Great to see a cast that is so close. They deserve 50 more years.

I watched the parade on the Hallmark Channel…………..Days bus was awesome 🙂 Wish I could have been there in person to see the parade……….

I Love DAYS Have Watched It For A Long Time.All The Stars Feel Like Family.Not The S

really enjoyed the video! thank you!!

This video was better than what I saw of the Days cast while actually watching the parade on Hallmark!