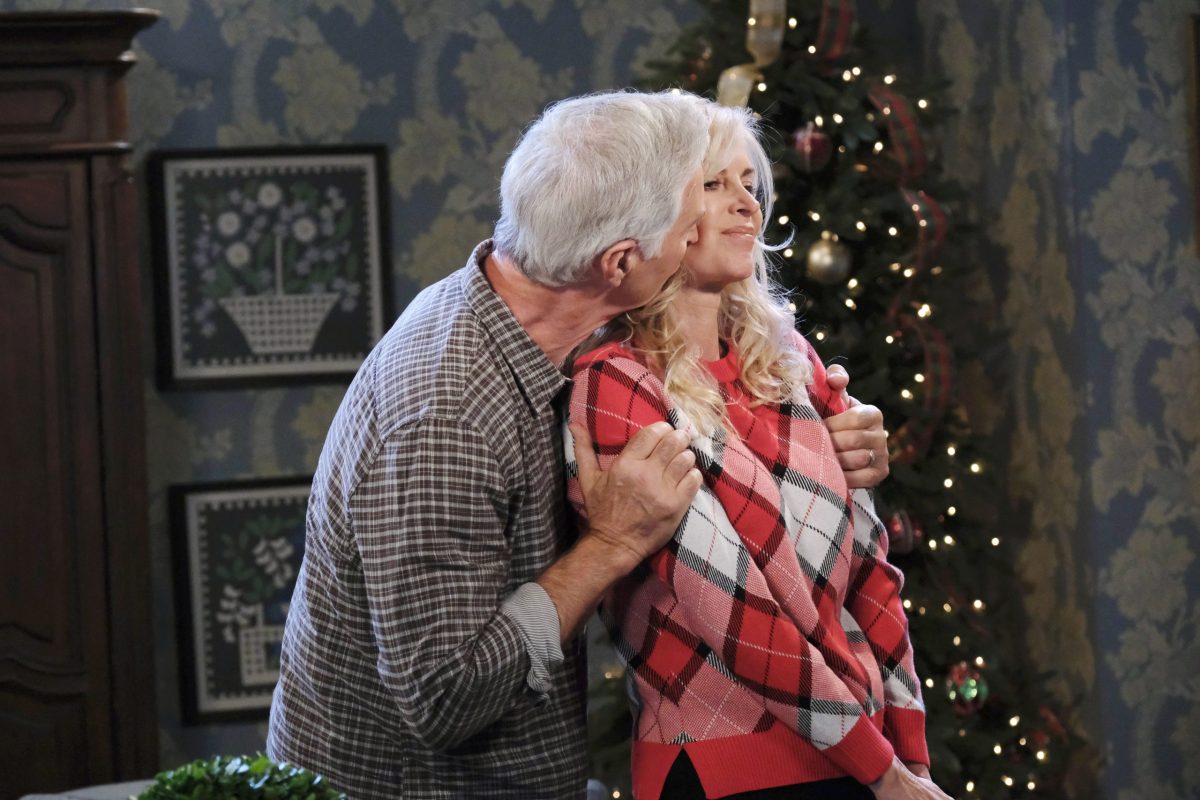 Riffing on Hallmark Channel holiday movies combined with inside Salem wink-winks and nudge-nudges, soap tropes, surprise returns and altered storyline shifts, Days of our Lives: A Very Salem Christmas now streaming on Peacock, had something for everyone, that by the end of its almost one hour and twenty minute tale, you were in the holiday spirit.

In the streaming flick, Will (Chandler Massey) and Sonny (Grant Tinker) are working hard to make sure Will makes his Christmas Eve deadline of turning in his holiday script. So the couple known as “WilSon” conjure up an altered “facts” story… sorta! 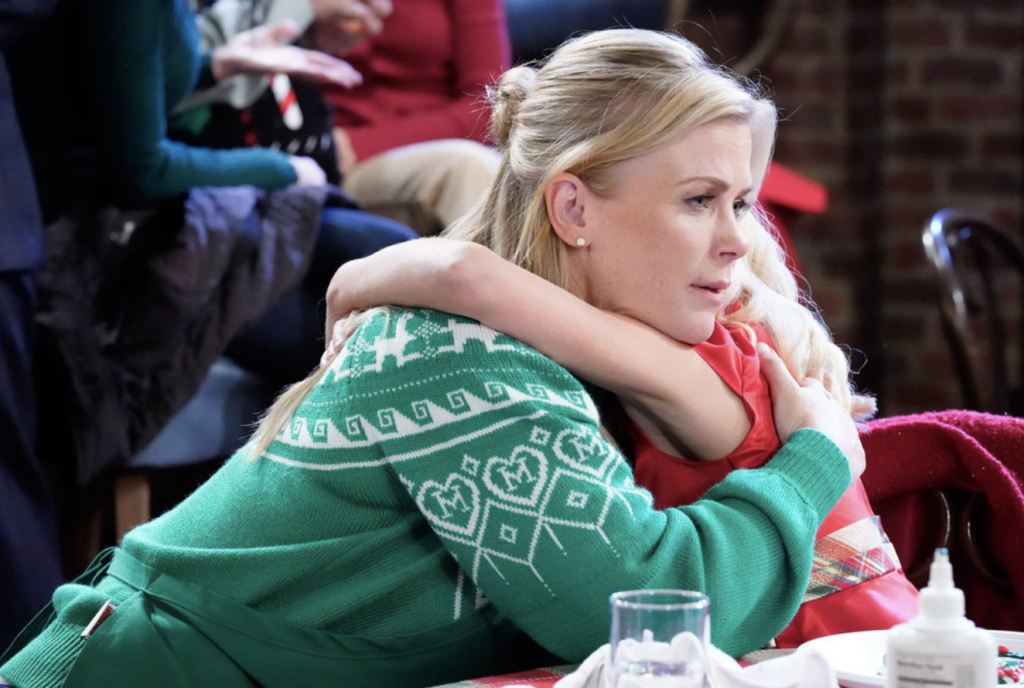 Now, Sami (Alison Sweeney) and Marlena (Deidre Hall) are running the Brady Pub, because Roman has died.  Paulina (Jackée Harry) is now the Cruella de Vil of Salem aiming to put everyone out of business for her own gain. 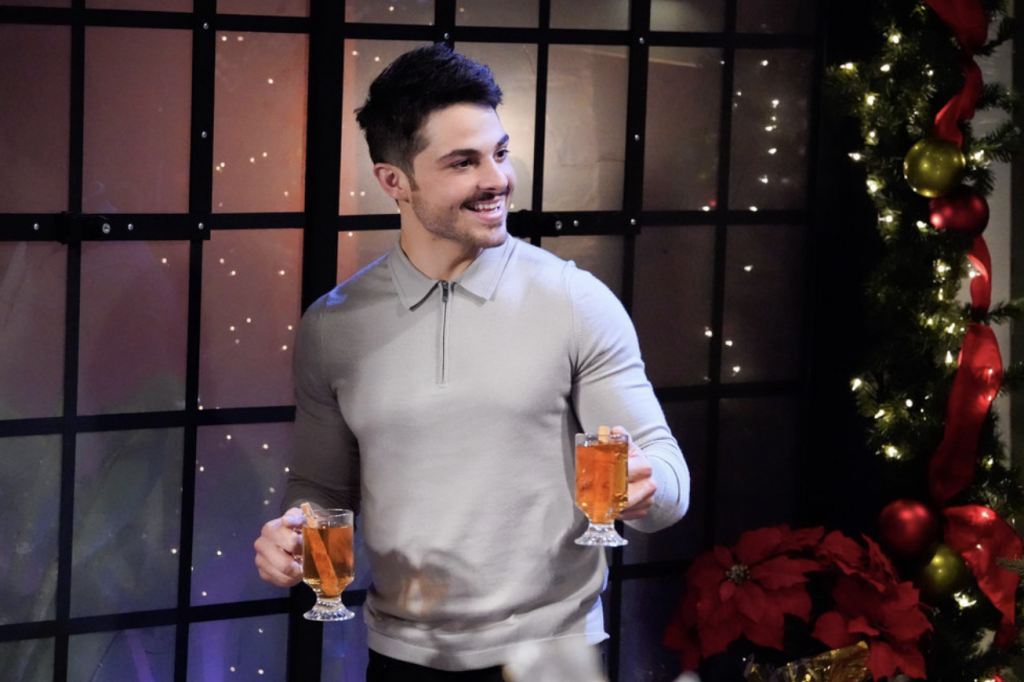 Sami learns that Sydney is her biological daughter (something that in the airshow happened years ago) in order for a redux of the classic bitch-slap scene between this version of evil Nicole (Arianne Zucker) and Sami.

Even though Nicole’s deception is revealed, she doesn’t end up completely alone after EJ (Dan Feuerriegel) dumps her for Sami.  A bum outside the Brady Pub hands her a tissue to wipe away her tears, and it’s revealed to be … Eric (Greg Vaughn in a cameo). 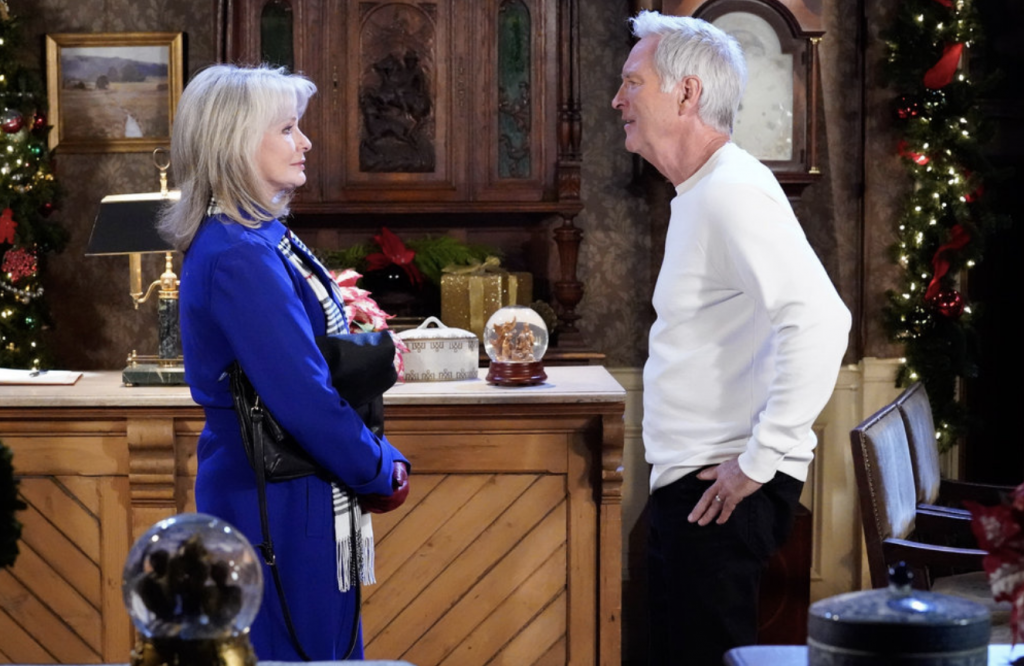 Elsewhere, John (Drake Hogestyn) is not married to Marlena (Deidre Hall), but Kristen (Eileen Davidson) and they run the Inn.  Meanwhile, as per usual, Brady (Eric Martsolf) and Kristen are lusting after each other … complete with one of the best scenes in the special, where a naked Brady, covers his private parts with cue cards that profess his love for Kristen (a la Love Actually).  Meanwhile, Marlena is longing for John, even though he is with Kristen. 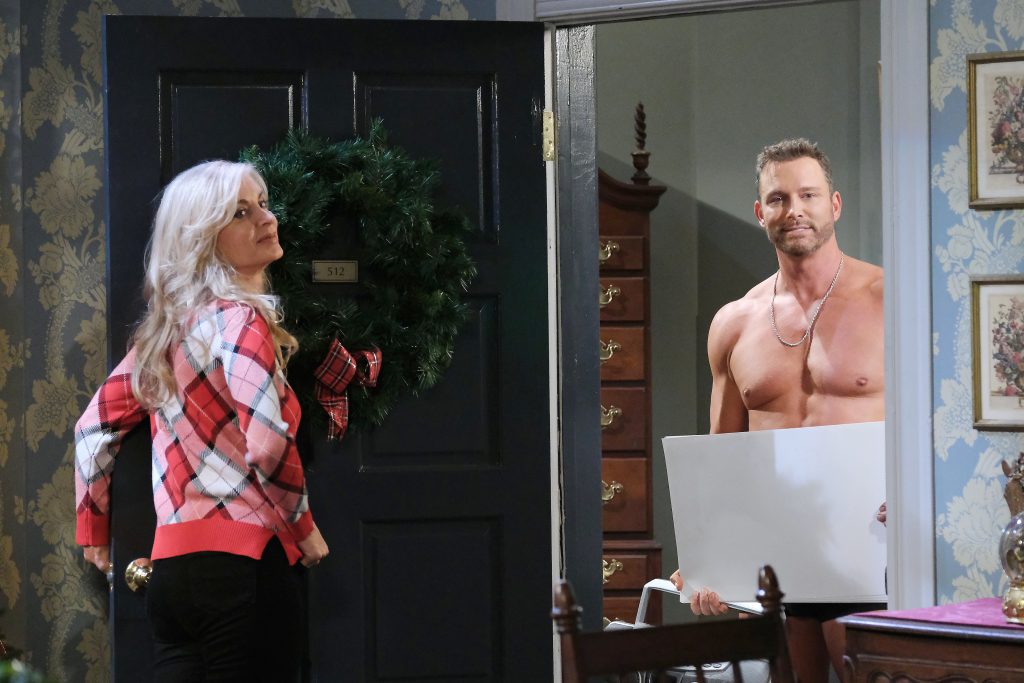 Paulina ‘s assistant turns out to be Leo (Greg Rikaart), and as he did in the previous Peacock streaming series … he saved the day! Leo, while going through files on Paulina’s desk, found a loophole that could save Salem business owners from being kicked to the curb. 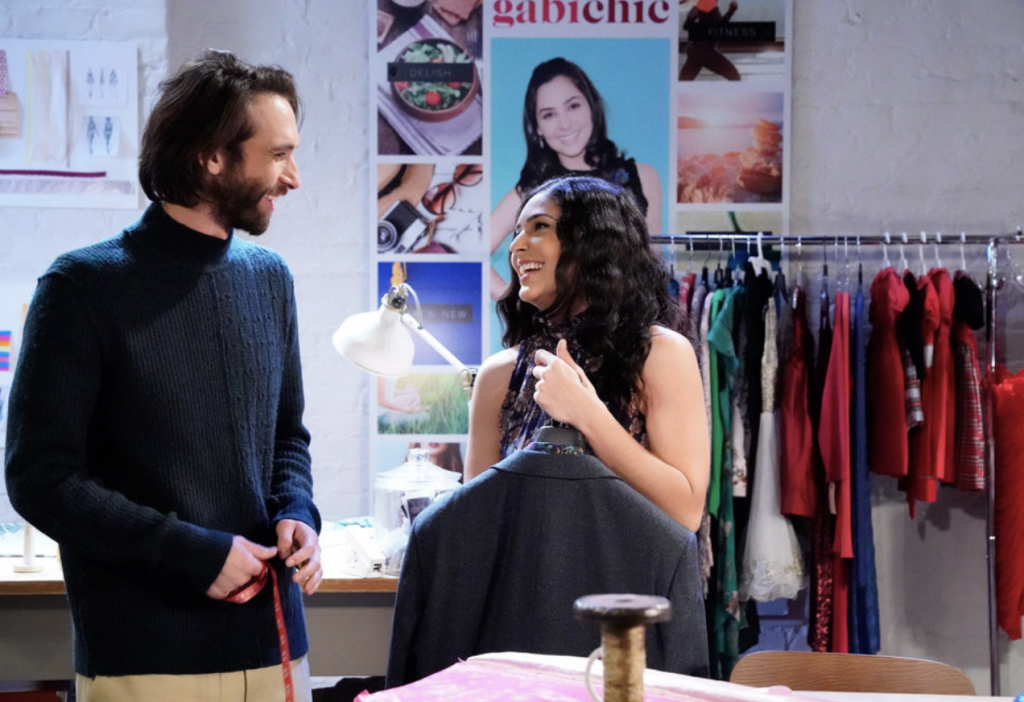 And it was great to see one of the finest actors, Blake Berris, back on the screen as Nick and longing for Gabi (Camila Banus).  You see, Will writes Nick into his script, while Sonny exclaims that Nick is dead. But this is a holiday tale, so whatever! 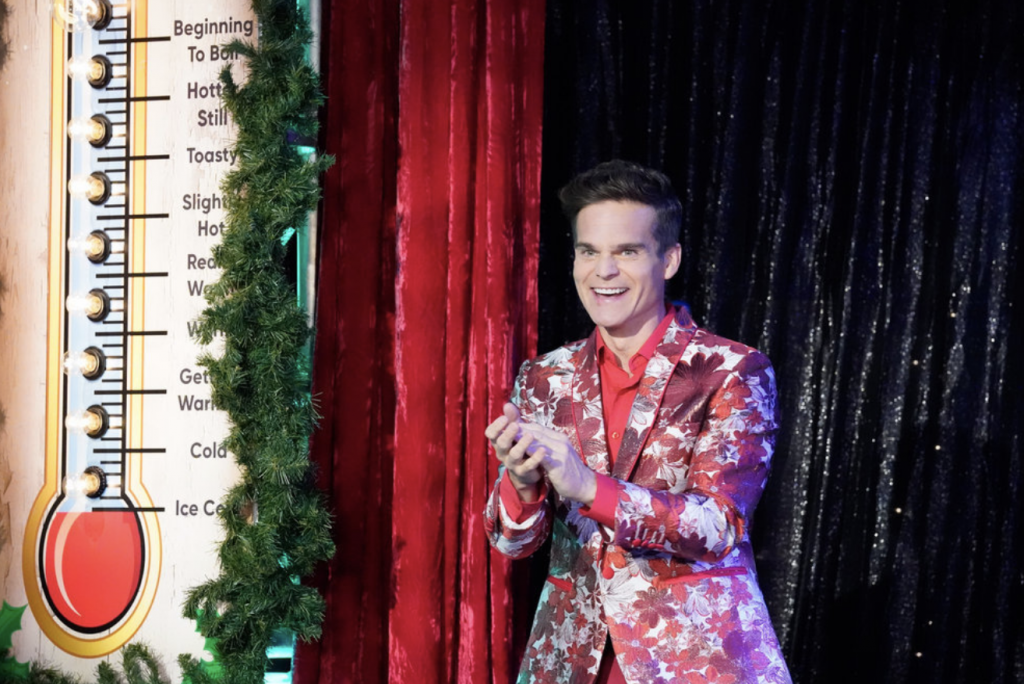 In the end, it was the town pulling together for a holiday fundraiser to save themselves with a talent show hosted by Leo featuring: the return of Sonny Delight, Amanda Bottom and Belinda Chinashop, followed by a Santa strip from the hottest men in Salem and voila’ – it’s drag queens and half-naked guys that save the day!

So, what did you think of Days of our Lives: A Very Salem Christmas ? What was your favorite part of it? Share your thoughts in the comment section below.

‘Days of our Lives: A Very Salem Christmas’ Now Streaming on Peacock

I loved the way they presented Brady. Camp and hilarious and so sexy. Eric Martsolf got the opportunity to show off a wider acting range as compared to the daytime show where Brady is often feeling sorry for himself. And speaking of showing off: That rocking BODY!

Cant wait to watch!
Especially to witness Eileen and Eric s reunion!
Sooo hot together
Eileen is soooo wasted on her cameos as Abbys mom on y n r!
Also instead of Fenn, played by Zach Tinker returning on y n r and giving Lauren and Michael real purpose , Days is using him wonderfully! I cant believe they ve traded Fenn for Theo and now this new lifeless Noah, as if Devon isnt enough of a wet rag
Days is primerib and Y n rs become leftover lunch meat

Very fun, clever, campy, and heartfelt! The movie length (rather than 5 episodes) was perfect. Great to see Blake Berris and Greg Rikaart . . . and so much fun to watch Arianne Zucker shine in this version of Nicole. Daniel Feuerriegel also got to showcase his acting with some subtle nuances of his EJ character that aren’t written in the daytime version. I hope these Peacock originals continue!

Jeff
EJ/Daniel Feuerriegel got to show off some of his other attributes, appreciated by this OLD time viewer.

Loved it! Very cute! Loved the different spin and everyone got to have fun playing a different take on their characters! Very clever and just good fun and had some nice Christmas moments too!!! Loved all the decorations. I wish they would do the transition shots in the real show too! Keep it up days!! The strip scenes had my jaw on the floor too!!! ❤️

No doubt these Peacock spin-off movies and short series will continue. You can tell how much fun the actors and the writers are having being allowed to be a little bit outside of the box.