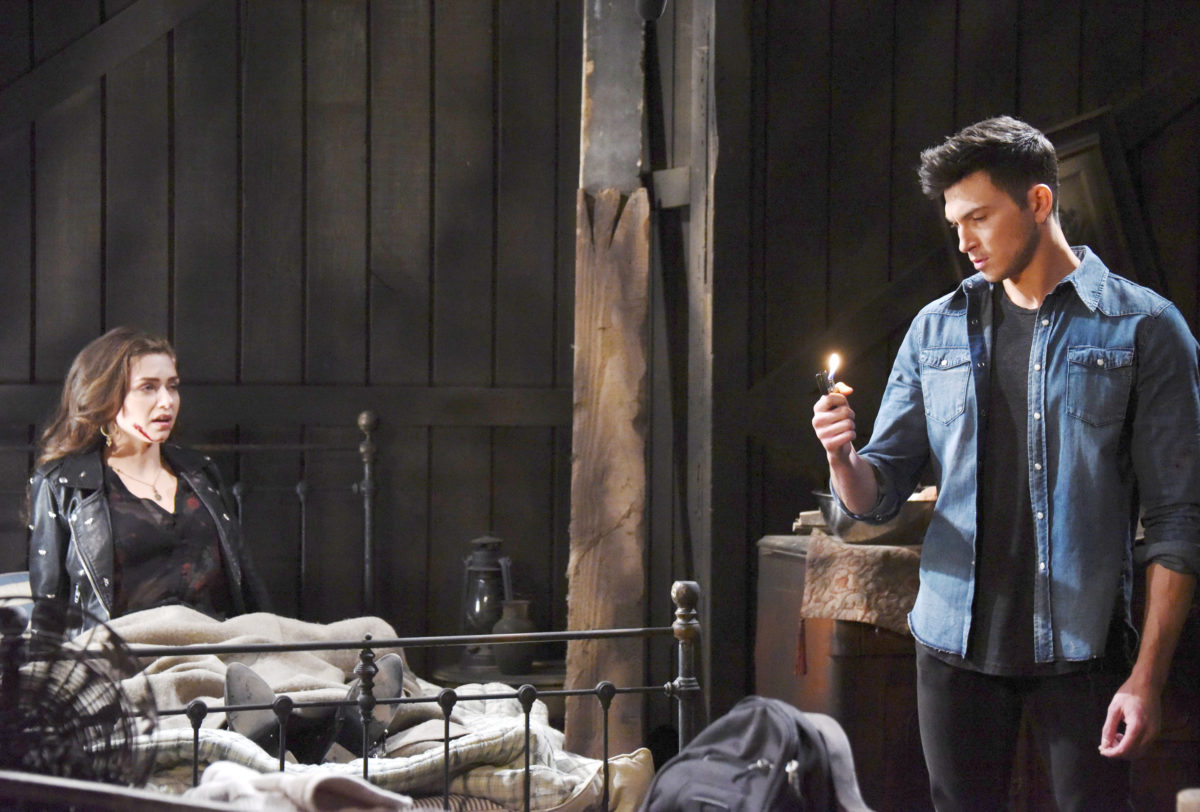 On Wednesday’s episode of Days of our Lives, Ben (Rob Scott Wilson) has brought Ciara (Victoria Konefal) to a very familiar place to him, the old abandoned cabin in the woods where he had: tied up Chad (Billy Flynn) and Abigail, where he had traumatized Abigail, and where she had given birth to Thomas, and where he murdered the midwife, Wendy (Denice Duff).  Throughout the episode, Ben flashes back to all those moments in time, and the heinous acts he perpetrated.

For this episode, DAYS re-created these key scenes in Ben and Abigail’s back-story, by having Marci Miller redo the scenes, originally played at the time by Kate Mansi.  Both Wilson and Miller were riveting to watch.

In present time, as Ben tends to Ciara’s wounds, he looks around the cabin and flashes to kidnapping Abigail.  When Ciara finally starts regaining consciousness and starts to moan, it brings back memories of Wendy aiding Abigail in the birth of her son, Thomas.  He recalls murdering Wendy and burying her.  Ben begins to relive more and more moments, and then the horrific time he wanted to set Chad and Abby on fire.  Ben continues to get more beside himself, and begins to pant recalling it all.

Later, Ben is standing in a corner, staring at the flame of the lighter that had been used to start the fire that had nearly killed Chabby. Just then, Ciara wakes up and takes a look at Ben. and she screams,”Oh my God.”

THE YOUNG AND THE RESTLESS: An Emotional Nick Hands Over Christian To Victor; Joshua Morrow Delivers Power Performance of the Week!

Is Bryan Dattilo The Next Cast Member To Exit DAYS?

Very impressed by all of these scenes! I’m really glad Robert is back as Ben, he does so much great work since Ben’s had an edge

I like Robert and I am perfectly fine with Marci playing Abby matter of fact I like her a whole lot better then Kate,not that I hate Kate I just happen to like Marci better,I just wish she would stay.Good Luck Marci in whatever you choose to do

Did not enjoy the remake of these horrible scenes. The first ones were bad enough, and these, not being actual flashbacks, made it hard to watch. Thank goodness for FF. It was not the same, using Marci Miller, and also Chad with the terrible new beard, he’s been sporting.

What makes the flashbacks (real or fake) hard to watch is their insistence of making the flashbacks look and sound like some idiot recorded a video on their cellphone and then played it back on YouTube. I don’t mind if they run the video through some sort of sepia toned filter or whatever it is they do, but for Hell’s sake, leave the audio alone.

Can’t even blame that one on ReRon, because Days was doing this for a couple years before he took over, and it sucked then too.

Didn’t the cabin in the original story line burn to the ground? I thought it did, but even if the cabin didn’t how did the bed survive and who put fresh linens on it? Of course I haven’t been watching daily lately, so I might have missed that explanation. I’m still not certain that I like this idea of redeeming Ben and then paining with Ciara–Bo was a “rebel” not a killer, so this isn’t quite the same thing as Hope/Bo pairing of the 80’s yet, I do like the actor and if anyone can pull off a convincing transformation-… Read more »

Maybe it’s another Dr. Rolf invention? After inventing the drug that brings dead folks back to life, he came up with another formula to reconstitute burned buildings, and make them look exactly like they did before.

Ridiculous?? Of course it is. But then, so is the idea that a serial killer can be “cured”.

I thought it supposedly burned all the way too. Is there a bathroom? Poor Ciara, she can’t just step outdoors, and how about the cute little bedside lamp? Ben must have stopped off at an antique store or yard sale, somewhere out in the boonies, where they are.This whole thing, smells of swiss cheese, and has as many holes.