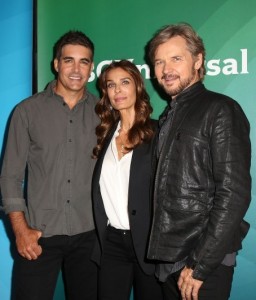 A big shout-out to all of the cast, producers, and behind the scenes personnel at Days of our Lives today as the iconic NBC soap opera celebrates its 51st anniversary.

Days of our Lives premiered back on November 8, 1965. Its touchstone is set against the backdrop of traditional family values, good vs. evil and features several core families that have kept things romantic, intriguing, and often deadly in the town of Salem.

Of course, we are talking about the original first family of Salem, The Hortons, and their rivals the The DiMeras, The Kiriakis, and  the other good samiritans in town, The Bradys!  Other key families on the canvas including: the Carvers, Johnson, and Hernandez clans.  The series enduring fan base and community, and their passion for the characters, the actors who portray them, and their love of the iconic duos of the past and present has also been a staple of DAYS.

NBC will celebrate the 51st anniversary this weekend in Los Angeles as the annual Day of DAYS event on Saturday, November 12th at Universal City’s CitiWalk.

Share your congrats and well-wishes to the cast and crew at DAYS for turning 51 and let us know why you have been an ardent DAYS fans all these years, or if you are a new fan just joining in on the drama, why the show has captivated you.  Share your thoughts in the comment section below!

Michele Val Jean Joins The Writing Team Of The Bay!

originally Santa barbara was my soap but when it went of the air i got very invested in Days at its history : the action and adventure plots , the romance with supercouples like patch and kayla , justin and adrienne , bo and hope , john black and diana colville ( genie francis , miss genie and diana ) , later john and isabella , john and kristen and john and marlena , shane and kimberly . the villains : stefano , vivian , kristen . cruise of deception , maison blanche , melaswen , marlena back from the… Read more »

HAPPY ANNIVERSARY, Days of our Lives!

51 and full of fun! My fandom hasn’t waivered since I started watching 32 years ago and I would welcome another 32-51 years!

Have only been watching for about 2 years. I was hooked right away and really enjoy Days!

Quite frankly and sadly, this once iconic show has become a total embarrassment and unless there’s a miracle, personally I cannot see Days having any more anniversaries as an active show. Do you really think that NBC/Sony are satisfied with those recent ratings numbers? Ken Corday, his staff, and the inept revolving door of writers have shown their true colors. They have all disrespected and alienated a large chunk of the fan base/audience too many times, and once those viewers leave, they surely are not coming back in time. Sorry. It will be very sad if/when this show gets cancelled,… Read more »

Pat…EXACTLY!!!!! I’m surprised that DOOL is STILL on the air. Hey…just saying……….

I have to agree with you Pat. I’ve only watched this show a little over 2 years and it’s gone down hill since then. The “cheap” factor is definitely showing in the stories and the sets. A friend of mine said she thinks the networks are making these shows so bad that the fans will be relieved when they are cancelled. They are trying to avoid the thunderous out cry the alphabet network received when they cancelled All My Children and One Life to Live. I think she’s right.

I SO agree with you Pat! I’ve quit Days 3x and this time it has stuck. I thought when they brought back Peter, Thaao, Matt A. & Stephen that it would entice me to stick around but what I noticed is that writing sucks and stunt casting never works. I stuck around for Bo’s goodbye since Bo Brady (as played by Peter R, not RKK) has always been my favorite character, but not even some of the actors I used to love could keep me interested so I haven’t watched in months and don’t miss it one bit. Loved this… Read more »

Wow, not a lot of people posting so far. Guess a lot of people don’t care. So many viewers I know have left and are not coming back. Anyways, good luck Days as you get closer to renewal.

yeah, agree with your post. even I took about 6 months off… after the 50th Anniversary… I started back watching “DAYS” right after the Olympics… and especially when Dena and Ryan started with their work… October 6, 2016 so… two months in to their transition ? I’m not disliking “DAYS” at all… it’s not (like @GH ) it’s not flatlining and it’s not off the charts… but it’s certainly more to my liking… “DAYS” is the most consistent, in my opinion… of keeping family alive with a rock solid consistent cast.. as well. I enjoyed watching the 3 escapees… it… Read more »

couple of other things: I am really liking the storyline… going on with Abe, Theo, & Valerie. I’m surprised at how much I liked Valerie right off. course it seems like their is something else going on with her. I had hoped that their could be a possible relationship for Abe. even if… ( isn’t theo the best ) Theo is against it… and wants his dad for himself… I marvel at how well this father and son is so well played… Kudos to James Reynolds and Kyler Pettis . makes me wish… Lexis was with us… so we could… Read more »

it was cheesy @best… watching Paul as a boxer, and Derrick as a cowboy… i’m so hoping this plays out … finally… something for every one.

Lucas and Adrienne are always a good time… hope they get a story worth their talent… it just smarts doesn’t it.. when they are relegated to prop… stand in… and supporting… it’s still a blast to see both of them.

finally… Ms. Kassie DePaiva… I hope she returns to DAYS

I agree with you about Lucas and Adrienne. I like both characters and both actors. They need more than just reacting to other character’s troubles. Perhaps one is coming. Each time I see Justin’s disapproving face, I think one may be brewing.

I am 100% in agreement with your last point. Kassie DePaiva needs to be on full time. I want to see Eve grow. I want to see where things go with Eve and Justin.

Congratulations! The show has been better of late, so that is definitely good!

Enjoyed it today. Loved seeing Shane. They screwed up bringing back Aiden, and ruining him even more. I see no on screen chemistry with hope and Rafe. I like them both, just not together. congrats to the show. It can be good, but it also can be boring.

I too wish they would have just let it be… as friends and co-workers… I’ve had enough of the googoo eyes at the Salem P.D. and lip locking in the interrogation room I loved Rafe with Kate… and plenty loved him with Sami… I just do not like the propped because Dena loves Rafe and Ken Corday loves Hope.. so there you have it.. a forced relationship and who cares what the audience wants since this is a serial… it would have been nice had we got to see Rafe… fall in love , have children of his own… and… Read more »

This show is getting good! Still would like to see a few things change! Kassie DePaiva back FT being one, another visit by Kristen, and I love Jen Lilly but why can’t they recast Theresa?

Why I watch Days in two words — Suzanne Rogers.