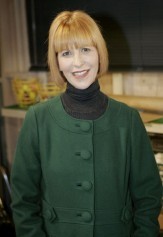 We knew something was coming down the pike when we could foreshadow that since Victoria and Billy could not conceive their own child, and that Daisy yesterday left her newborn baby abandoned at a church ( or so we think), these two stories might intersect.  When the news came a few months back from TV Guide that primetime, film and Broadway star, Ellen Greene, best known for her quirky roles in Little Shop of Horrors and more recently the primetime series, Pushing Daisies was headed to Y&R for a guest turn, it would have to be something very interesting for the show to cast Greene and for her to agree to come to Genoa City.

Now in a new interview out today from TV Guide it is revealed that Greene is playing Primrose Deville, the daughter of black market baby baddie, Rose Deville, played by the late Darlene Conley on Y&R back in the 80’s.  Seems Primrose will connect with Billy Abbott (Billy Miller) starting the week of January 7th for a five episode stint.   So what do you think?  Could Billy be in the market to buy a baby?  Here is an  excerpt from the interview with Greene, who announced that she had been reluctant to do a soap role!

Greene on what changed her mind to take on the role of Primrose: “I read the script. It was so good I was shocked. I just had to do it. I can only tell you this much: Primrose will bring happiness into Billy’s life. Anything more and they will have to annihilate me. That Billy Miller is a very good actor, by the way. So much fun to work with, and such a dear. In fact, every single person at Y&R was kind to me.”

Shannon Kane opts to leave All My Children!