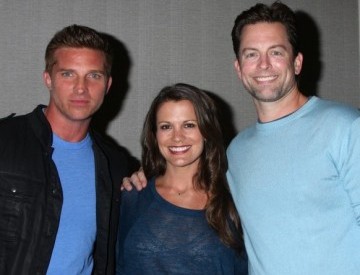 This past Saturday night, fans from all around the globe traveled to the Universal City Sheraton Hotel, in Universal City, California to meet the cast of the number one, The Young and the Restless up close and personal!  The Y&R Fan Club Dinner is held only once every two years.  This being Y&R’s 40th anniversary year on television this gathering was extra special in more ways that one.   On-Air On-Soaps was there as well, taking in all the action.

After being introduced to the adoring crowd one by one, the residents of Genoa City entered the Grand Ballroom and took their place on a staging area, where three-time Daytime Emmy winner, Christian LeBlanc (Michael) hosted a Q&A and gave every cast member a question to answer!  Several VIP’s were in attendance including Y&R co-creator, Lee Phillip Bell, Y&R EP Jill Farren Phelps, and CBS Entertainment Daytime VP, Angelica McDaniel, who also spoke to the fans and took several moments to remember the late great Jeanne Cooper (Katherine Chancellor), whose presence was felt.  Peter Bergman (Jack) recalled just how much Jeanne loved the fans and being at each and everyone of the gatherings over the years.   McDaniel then lifted a glass and every one toasted to Jeanne!  And then, the audience was treated to a clip package of Jeanne’s career on Y&R.   It was the emotional point of the night and when we looked out over the audience, we saw many fans wiping away the tears.

After dinner and a look at another clip package of what makes The Young and the Restless one of the most popular daytime soaps in history, fans got their opportunity to get into lines to take pictures and get autographs from their Genoa City favorites.  A special shout to Y&R Fan Club Director, Cathy Tomas for pulling all the elements together!

Now after the jump, take a look at our first look exclusive photo gallery of the 2013 Y&R Fan Club Dinner complete with our extra special captions featuring the stars of the number one daytime drama.

To view the gallery you can either view as a slideshow, or to go to the next group of images hit the NEXT GROUP icon to the left of the + sign

Eileen Davidson Set For A Return Visit To The Young and the Restless!

I enjoyed Jeanne’s tribute, and the Y&R clips throughout the years, check in was 4:00 didn’t get into the doors until 4:30 and dinner was at 7:00. They need to make the event earlier, I think maybe more actors would have stayed, I didn’t get to see Mel, she had left.. I saw Eric and Peter bergman but they left too. I was there until midnight and only saw 5 actors. They lines were not organized and nobody making sure they ran smoothly, I had a couple of girls cut in front of me ib Billy’s line.. The rooms were… Read more »

Wish Sharon was there. I love her she is my favorite. I hope Sharon and Adam get back together

Love Sharon. I am not a fan of Chelsea or Avery . I hope the new writer brings back Sharon and Adam and they raise the baby and find someone else for Dylan and Nick

Great photos, Michael. Thanks from one of your fans. Must have been a great evening.

Here is the story that would save Y&r….. After nick and Avery say Ido, someone from her past comes back to get revenge on…Nick,Avery and Sharon! Yup Matt Clark is Avery’ex and he is out for revenge! Elsewhere in Gc, Victor suffrrs from a heart attack and he leaves all to one child…..

This was my first fan club event. I certainly enjoyed seeing all the stars that were there. However I thought the event was not managed correctly. Lines were way to long, two floors of stars, and no one could tell you who was where– The lines were so long that you didn’t know who’s line you were in. Extremely hot in these areas, and not water was provided to the quest, until we complained. The food was horrible, and I think not thought out at all. How can you can one meal for everybody, The meal was chicken, and there… Read more »

I would have enjoyed this picture montage a lot better had Jill Farren Phelps not been included in the pics! Get that soap killer outta there!

Goodness please AH/Victoria why would you show up to an event looking like that? Why is she still there? Does she not own a hairbrush on or off the set? Can anyone page GinaTognoni to take this role over and run with it. I know she lives in NJ just pay her whatever she wants and I might be excited about the character again. Why MAB got rid of her husband and kept her escapes me!

I miss the music and singing of Leslie Brooks. The big guys at Y&R seem to have forgotten one of the most popular stars from the 70’s.

Thank you Michael for all you do for my favorite Soap. I love the Young and Restless. The pictures were great. Love my Michael Muhney. So handsome and talented. Loved the pic of him with Steve and Melissa. I live in Georgia and just a dream to ever attend one of these events in California. But you and several other fans make us feel like we were there. Thank you once again.

Doesn’t Melissa Egan resemble Kimberlin Brown in her first years as Sheila? It would have been cool if they’d made Chelsea the grown daughter of Sheila and James Warwick. Oh well!

What a horrible event. And the Sheraton Universal never handled a banquet before as the service was also horrible. The Autograph session started an hour late, and yet the main stars left at the required time. It appeared that the hotel wasn’t even starting to set up the autograph event until the meal was over. We attended the “Bold & Beautiful” event the day before at the Farmers Market and that was better organized and received many free gifts PLUS a free bottle of water while standing in line. The Y & R handled out nothing free except a trinket… Read more »