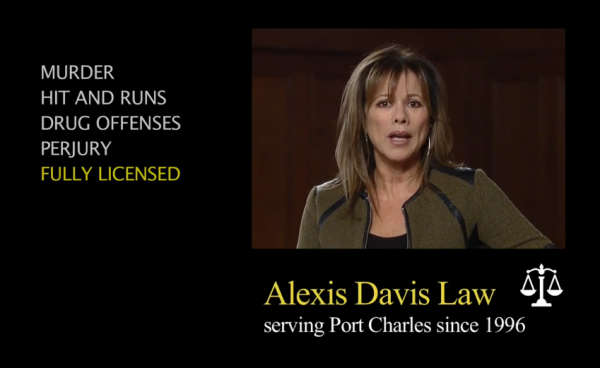 The new online digital series hosted by GH’s Daytime Emmy winning Nancy Lee Grahn (Alexis) features her cast of comics who are also die-hard fans of the on-going drama of Port Charles, and the series features on each episode a cast member from the soap!  Jason Thompson (Patrick) appears in episode one, Tyler Christopher (Nikolas) in episode two, and Sebastian Roche (Jerry Jacks) in episode three!

In episode one entitled “Sexcapdes & Tears” Nancy welcomes Jason Thompson and comedians Sarah Colonna and Jimmy Pardo who discuss the wildest place they ever had sex off-camera.  Plus, we learn the art of crying on cue.   Watch the fun when several GH stalwarts try to bring the tears, especially Mr.  Thompson!

In episode two entitled, “Dating Advice & How To Be A Soap Star”, Nancy and comedians Sarah Colonna and Jimmy Pardo dish out dating advice to Tyler Christopher for his unlucky in love character, Nikolas Cassadine.  Plus, Nancy hits the streets of Hollywood Blvd to track down the soap stars of tomorrow.   Watch the opening of this one folks, when Nancy arrives at GH’s studio to get camera ready!

In episode three entitled, “Lather, Rinse and Repeat”, Nancy confesses to comedians Jen Kober and Jackie Kashian about her affinity for naughty men, namely Sebastien Roché’s character, Jerry Jacks. A revealing look at the cast of GH most inner-thoughts and a message from the law firm of Alexis Davis are some of the highlights!

Watch the premiere episodes of GH Now! after the jump! Then share your thoughts on the series, the content, and your favorite moments!

General Hospital is a good time.. it is fun behind the screen and on it..
The actors of GH have a good time, I always felt that to be true..
The actors do not take it seriously, as is obvious, but yet there are fans who take GH way way way too seriously.. I never understood why some fans can’t have fun with it also ..
Nancy’s show will be watched by me 😉

It has nothing to do with “fans who take GH way way way too seriously”. Believe it or not GH is not every soap viewer’s cup of tea. If you like your soap stories campy, silly, sometimes dumb, but almost always entertaining then GH has plenty of them. I’m glad you enjoy that. I do sometimes. But some of us enjoy and prefer more realism in our soaps built around families and the various conflicts between them. We find that entertaining and a good time. Different strokes for different folks.

Funny bits!! I like watching the actors laugh & show themselves apart from their tv characters. Will Michael Fairman be posting links to the next episodes as they become available?

Thanks Nancy & all for sharing your sense of humor! 🙂

Michael has already posted the link in the above post..
The ABC link to the show..
click-on the ‘blue’ ABC to go to the show..

Nancy is very good at hosting. She needs to drop the comedians right now! They are not funny and overly annoying. Nancy has a sense of humor and can hold her own and doesnt need comic relief. It was great to see Sebastian on her show and I would have enjoyed her interviewing him and doing some behind the scenes stuff. The other two women stepped on his words and it was unwatchable!

Way to go Nancy!! I enjoyed her show very much. NLG is very hilarious and a good hostess.

ep 1. was the funniest w/Jason Thompson. he looks so good… that’s out of the way. the crying on cue was funny… and the torso shots….. LOL…. liked JT humor about it all

ep 2. I loved the sax music playing while NLG and intern were making out

ep 3. I wasn’t watching GH when Alexis and Jerry Jax were an item… I would have LOVED this…. Alexis is a bona fide frigidaire…. Jerry Jax would be just the man to keep her busy

YOU KNOW : they showed one of the first scenes , in which these two first shared…. when she started on the show…. IE: the sexy shower scenes with Britta and Patrick proof positive that she is beautiful… the look in his eyes and body language response Britta has so many avenues layers and drive for the canvas as a whole i’ll throw this out their… the reason Nathan is floundering…. there are no scenes with Nina, Britta, Madeline, and nary to none with Leisl. to carry him…. oye! he’s drool to look at…. are Nathan and Maxie strongholding the… Read more »

Bullseye, Patrick. Is this what we will look at, day in day out? Bedroom scenes between Nathan and Maxi….they act like two thieves in the night, which I don’t mind, but they are as bland as polenta. I love looking at Nathan’s buff bod, just do not let all his posturing (investigating if there was any tampering involved with the election) be only to impress Maxi. Less action in bed and more in helping Anna. Also, how does Nikolas change his stroke mid-stream? Hmmmm. Is he also under Medusa’s (the Gorgoneion, Hellenic corpse) spell? So many new twists. I wish… Read more »

I don’t know, Patrick. As I’ve said previously I love Ryan Paevy…and I do find him believable in the role. He’s come a long way from his stilted delivery. As for he and Maxi, I do think they’ll eventually get them out of the bedroom but at this point I think it’s realistic…they’re new to each other, they waited a long time to be together…and I enjoy seeing the first throngs of infatuation and lust. I think they’re adorable together. I think as soon as they “simmer down” lol…Detective West will probably be involved in helping Anna unravel the corruption… Read more »

Nathan and Maxie, are no where near the bottom of the barrel think: Daniel and Nicole (Days) : ugh.. and double ugh… on snore Daniel… it least it’s not with triple ugh Jennifer… dang ! Michael and Kiki : LOL…. wow! and this is a real live couple the worst with absolutely no story : Abbs and Ben, DOOL. shes faster outa the golden circle take leave of her senses…. dullsville honorable mention : any one with Alexis p.s. : yeah, it’s the throngs of infatuation and lust. shoutout : where is Nina and Franco? shoutout: what on earth is… Read more »

I so agree, Patrick, with your description of all the couples you have mentioned. Daniel and Nicole are a real couple also….so, I do see the spark…not fully because I suspect they cannot display being in the throes of passion…LOL, it’s daytime. Ben and Abbi are really in outer space. There’s too much sexuality, and then there’s not enough. In this case, there’s not enough. Ugh, poor Ben….stuck with a rubber doll. Nathan is gorgeous, but he lacks sensuality…he simply is not sexy. I hate myself for saying it, I really do because I love him…but it is not happening… Read more »

Loved it! What fun!

OMG… loved it!!! Nancy is so hilarious!!! and I loved the guests… can’t wait for more.