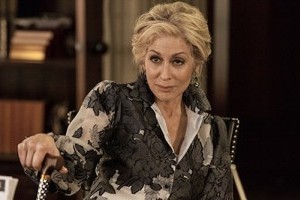 Just when you thought the new season of TNT’s Dallas couldn’t get any juicier, tonight (9PMEST/8CST)  two-time Daytime Emmy and Tony Award winner, Judith Light returns in her role of Judith Ryland! What will happen when  Ms. Ryland, the mother, err grandmother from hell comes back?

In addition, in a new piece on the women of Dallas fashion at Zap2it.com, the series costume designer, Rachel Sage Kunin talks about Judith’s look for the series revealing:  “In her navy, charcoal and dove Carolina Herrera blouse and tailored charcoal slacks, Judith Light’s character, Judith Ryland, gives off an aura of authority.   She is so lavish, and I love putting her in silhouettes, and she is so much fun to dress.  The belt is from Nordstrom, where “Judith would never actually shop,” Kunin says.  “I am such a method costume designer because I like to shop where the character would actually shop. ” Kunin added.

Are you looking forward to Judith Light’s appearance on tonight’s episode of Dallas?  Let us know!

Popular Favorites MIA After The First Round Of Voting For The Daytime Emmy Pre-Noms!

GH SNEAK PEEK: Ric Asks His Ex Elizabeth Out! What is Mr. Lansing Really Doing Back In Port Charles Anyway?

She’s fantastic but not nearly fantastic enough to get me to watch this show.

VICTORIA PRINCIPAL, on the other hand …

YOU’RE MISSING OUT!!! Wait a minute no you’re not. You wouldn’t comment if you weren’t watching. You just want to see how many people replied to your post. TRY AGAIN LOVEY!!

She makes her character on Dallas simmer with barely controlled fury; makes me wonder what made her character so mean? I only wish someone like Sue Ellen will make her shake in her designer shoes.

Victoria Principal is NOT needed for this show trust me. I prefer Bobby with Ann….I would rather they reimage Knots Landing than bring back Pamela!

I have not watched I am happy for them but as my mother would say this is not my Dallas. We were down last May to visit Southfork in Dallas it was a lot of fun to hear about the owners of the property etc. I just do not have the feel in my gut like I did way back when. VP get’s a lot of grief but as my Daddy use to say best dam looking woman on the show. Patrick Duffy and her had off the charts chemistry the season that he died was great. Then the Dream happened and well to be honest it went to hell and a hand basket! Lol!

It is Dallas.. why would have to be ”your” whatever that means, Dallas to enjoy an excellent series..
It has me on the edge and ALL the actors are giving us the best of the best in acting..
The story is all connected and moving along into its’ glory..
I think this season is much better than a the ”old days” .. lol
try it you will like it! 🙂

This is like an MTV, reality show version of the once great drama.

This version isn’t even 1/10 as amazing as the real “Dallas.”

Simply an expression to be honest I tried it just did not pull me in and not real crazy about the actors that play the roles. Plus my husband and I are nuts for Bates Motel and Blacklist so we have enough TV on Monday night. Glad you are enjoying it SuOOO!

The original ‘Dallas’ was world wide popular and the ‘Who shot J.R. was the most talked about soap plot ever and made news everywhere…the new version will never top the originals greatness but its still a good show!!!

This show doesn’t have to TOP what it was and the original DALLAS didn’t belong to anybody’s MOTHER. This show is MORE than intriguing enough to keep me coming back week after week. Thank goodness TNT had the cajona’s to revamp nighttime soaps in their original no holds barred form. This DALLAS is an instant classic and so is JOSHHENDERSON…COLBY CAN’T SMOULDER LIKE THAT!!!

Just for you Dallas fans in case you do not know Linda Gray/Sue Ellen her leg is used on the poster for the movie The Graduate. Just a little trivia!!!

She just plain scares me. I can see where her granddaughter gets her evil ways. Emma has made John Ross her b***h!!!

Mama Likes. That floored me, lol

oh so agree ! Judith Light deserves an award for that scene !

You are so right !!!!!. People who don’t watch really don’t what they are missing. One of my favorites right now.

This show is fabulous. If you loved Dallas back in the day, you will love this as well. Great show!!!!!!

Watched Dallas. Judith was fabulous. Loved her cool under the “strip search,” and how she re-asserted herself at Ryland, albeit as a bad girl. Competition for any of the characters on the show.

After the jump, watch George Kennedy as Albert on The Young and the Restless in scenes with Eric Braeden and Joshua Morrow (Nick).  Then share your thoughts on the passing of this talented actor in the comment section below! END_OF_DOCUMENT_TOKEN_TO_BE_REPLACED