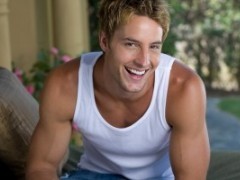 We loved Justin Hartley this season on ABC’s Revenge as Patrick, and now the heartthrob has landed another juicy role on another primetime soap, but this time’s it’s ABC’s Mistresses!

According to TV Line, this summer Hartley will be seen in the role of Scott and will be a new love interest for for Jes Macallan’s Joss! However, look for Scott to be somewhat kinky!

Mistresses executive producer Rina Mimoun teased about the character of Scott: “He’s the nicest plastic surgeon in Los Angeles with a teeny tiny fetish… just enough to keep someone like Joss interested. He gets Joss to do the one thing she never thought she’d ever do.”   Earlier this year, Mimoun teased that Joss might fall in love for the very first time but thisbegs the question, “Jow will she screw it up?”

As for Hartley, the former Passions star has been very in demand.   hehas also landed a primo role on the upcoming ABC comedy series pilot, Damaged Goods.   When you’re hot …  your hot!

Y&R's Sharon Case Interview: Is 2014 Finally The Year For SHICK?

I thought Mistresses was cancelled months ago.

Nope it was renewed for a second season.

It certainly should have been! I inadvertently stumbled upon this show last summer and was immediately appalled at how disgusting and depraved it was. Such a shame JH is going to be a part of it…he was excellent as “Patrick” on Revenge…sure hope he returns from Tuscany next season!!!!