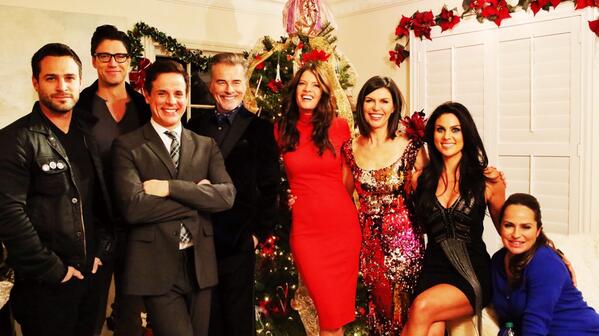 It is On-Air On-Soaps final video interview of 2013!

We could think of no better way then to close out the year and have some holiday fun than to sit-down with Two-time Daytime Emmy winner, Michelle Stafford (Ex-Phyllis, Y&R) to get the skinny on her upcoming premiere of her wildly successful The Stafford Project’s season finale!

During the video interview, Michael Fairman talks with Michelle and the two of them reveal some great teasers on the parts played by Crystal Chappell, Nadia Bjorlin,  and James Scott in The Stafford Project season finale! In addition, they are joined by one of the most important cast members of The Stafford Project, Michelle’s daughter, Natalia!  Watch what happens when she joins the conversation!

For those fans who miss Michelle on Y&R, she does take a moment to once again address her decision to leave the number one soap opera, plus we chat about the success of her web series, and look back at the making of The Stafford Project’s inaugural season that featured Joshua Morrow (Nick, Y&R) and motion picture star, Kelly Preston to name a few,  and what Michelle would like to see happen when they film a season two!

Watch now this very special interview with Michelle Stafford and special guest, Natalia below! Then, let us know if you will be checking out The Stafford Project season finale? What you thoughts on Michelle’s comments during our chat?

She seems so much happier since she got off the show. In light of recent events, I understand why. That set seems like a tense place with rampant egos.

Can’t wait to see the finale -especially James Scott :). I have enjoyed the episodes, especially White Secret & I laughed out loud at the one with the date with the singer who sang “Michelle My Belle” to Michelle. Guys do that to me too. It’s so awkward!

Loving The Stafford Project! So clever and hilarious. Can’t wait for this finale and what’s teased for next season. Also glad to hear Galen will be included next year. He is so naturally funny and sexy to boot!

Michael, this interview was beyond, beyond fabulous! Loved seeing Michelle again in her latest envirerment. She seems happy in her new role as a producer.Her fans will be delighted when her show returns with all the terrific stars. Loved this interview, Michael, because you and Michelle are so comfortable with each other. I was happy to see Michelles’ daughter who is an early actress all by herself. Looking forward to the next go-around, Kudos to all and happy holidays!!

My question is: Will Phyllis’s character be replaced by another actress so that, that wench Sharon can finally get what’s coming to her for Phyllis’s accident. How much longer are we gonna have to hear about how much she loves her soap daughter before she is written off??

I love michelle stafford so much. She is very down to earth, and so funny. T hank you so much, michael fairman for the wonderful video interview.

GREAT interview; I’ll always miss what she brought to “Phyllis” but am so happy to see her doing so well in her new endeavor and will support her always! Phenomenal talent!

Does Michelle realize how continuously she says ‘yeah, yeah’?

very annoying to me………

I hope not because RC is going to pair he Silas Clay or she might be a Skye recast!!!!

I think she better suited for Y&R

I’ve never watched “The Stafford Project” but will definitely tune in tomorrow to see James Scott..!

I actually prefer Michelle in her series “The Stafford Project” to playing Phyllis on Y&R. I do miss her in scenes with Peter Bergman, Christian LeBlanc, and the Graz but he left too. I would love to see The Graz and Peter on her web series, also Elizabeth Hendrickson, Nancy Lee Grahn and Vanessa Marcil. I’d love to see Maurice Benard and Michelle too. I love love love The Stafford Project, it’s so funny and I always thought Michelle tried to bring humor to Phyllis. I always liked when she got to do comedy on Y&R. I cannot wait to… Read more »

Thanks Michael… fabulous interview!!! Loved it!!! Can’t wait for the finale!!!

Hey Shawna,
Ita love Michelle’s series, she is so likeable, but have missed her as spunky Phyllis!
She writes better stuff for herself, natch.
Miss her with Jack and his Red, would love for Peter Bergman to guest on the SProject what a hoot that would be! When she left I felt robbed of my reunion of Red and Jack.
Nice interview here .
Thanks Michael Fairman.

I saw it..very funny.
Krystal Chappel is really funny.. a hoot
Finola Hugues is spunky and sassy and her accent..awesome
Christian Le Blanc, pretty Marco Dapper..fun
And the end with Natalia and James..so cute.. and charming.
Well done Michelle. When will start season 2 ??

i cant believe she left y r michelle reminds me so much of my daughter who lives in georgia idont get to see her often enough ,but watching her on y r i felt it was her they even look and act alike iam very ,very sad to see her leave the show,i have cried several times