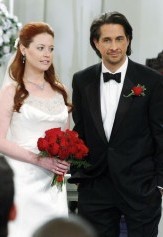 Now hold on a minute.  Before anyone says One Life to Live’s Bree Williamson (Jessica) and Mark Lawson (Brody) were equally as good and deserved this acknowledgment as much as Melissa Archer and Michael Easton, this was an extremely hard one to choose.  But On-Air On-Soaps believes that Williamson and Lawson’s even more powerful moments are coming next week, so stay tuned.  So therefore, and in the end, we have decided to give this week’s Power Performance of the Week to Melissa Archer and Michael Easton, who as Natalie and John had the showdown of all couple showdowns, and right before Valentine’s Day, too!

“Heartbreaking” is the word we would use describe the performances of Archer and Easton, as after Natalie and John’s and Brody and Jessica’ s double wedding is busted up, thanks to Vimal and Clint, the couple retreat to air their dirty laundry in a private room in the church.  John wants answers, and a trapped Natalie has no where to go with it, but to spill the beans.  That indeed, she slept with Brody.  With tears streaming down her face, and anguishing that the truth she never wanted her fiancee to hear finally out, McBain, ever the detective, knew that there was more to this story – thanks Marty!

Then, John welling up with tears screams at Natalie,” Say it! Just Say it!” And with that Natalie lets out, “You’re not the father of my baby, Brody is!”  It was those next moments of devastation, played to the hilt and with such deep pain and such subtlety, by Michael Easton that made many watching at home grab for their hankies!  And as for Archer, the saddest and most riveting moment of her performance came when Natalie realizing her life with John is now torn to pieces, begs him to listen and says, “I love you  I wanted to give you this.  John, he is your son.”   John, whose belief in Natalie is shattered snaps back, “I don’t have a son, Natalie.”

The writing team of OLTL did an admirable job of juxtaposing Natalie and John’s pain and Brody and Jessica’s angst as these two couples lives are completely shattered by betrayal, lies, and DNA tests!  Archer was perfection as a woman trying to hold on to her man, even trying to believe that if she continued to tell the lies she had been keeping, perhaps she could be happy and fool everyone!  But as we know in soaps, you can’t fool everyone all of the time…most of the time perhaps, until they get a clue, and John did this time!

We can’t wait till Monday when Jessica and Natalie have a showdown, Tess comes out,  Brody and Ford to go at it, and to see what will happen to the the friendship bond between John and Brody.

Watch the Power Performance of the Week below!

thanks for this its true they are the power performers of the week!!!

I agree, both were spectacular in their scenes, especially Michael.

Melissa Archer and Michael Easton are both such subtle, natural actors. They can show so much emotion, without any dialog. With the dialog in those scenes though, they knocked it out of the park. You knew what was coming and you could feel the pain; but you couldn’t look away. Wonderful scenes and wonderful actors!!

Michael, I’m glad you posted that scene from OLTL. I missed that episode. This really is powerful stuff and Michael and Melissa were outstanding. I really felt for them and their agony. It was very upsettng. Now we have to go all over it again with Jessica and Brody. I hope I have the stomach for it! I say well done to all the actors.

Michael and Melissa were hands down the right choice this week. Thank you for how beautifully written this article is and for posting the perfect video to go with it. 😀

I agree they were the perfect choice, Melissa Archer and Michael Easton bought the house down! I could barely concentrate during other’s scenes because I was so eager to get back to there’s. They were riveting. Nat (MA) had me in tears as she was trying to explain herself, especially that moment when she told John her baby was Brody’s. WOW! It was the broken way in which she said that, that started the flood and John (ME) when he stroked her face and said he had no son? Boy that was heartbreaking. Michael and Melissa did what they do… Read more »

You are so right. Michael Easton and Melissa Archer were phenomenal this week. Melissa has been shining in this whole storyline and in my opinion should be the front runner for an emmy nomination this year. It was fantastic to see Michael get his chance to shine. He really let us see all of John’s emotions as his life as he knew it collapsed around it. Thank you for acknowledging these two phenomenal performances.

Incredible performances by both of them. I could feel their pain and was riveted to the TV. This is where their chemistry lies. They are so real together and their connection cannot be denied. ME showed so much depth in his portrayal. I thrilled he was given these moment to shine!

I didn’t know Michael Easton had a performance like that in him. Give the guy the Emmy now.

Thank you for giving these two the power performance for the week. I have never seen those two better than they were on Thursday. Melissa Archer has been shining in this story, and she absolutely broke my heart as she desperately tried to hang onto that lie. She knew when she spoke it out loud that it would be real. Michael Easton floored me. The way he yelled at her to “Say it”, and then his reaction after hearing the words. He was broken and I felt his pain. I agree with the person who said that it felt like… Read more »

I have followed this couple since 2004 – and I am in total agreement with you. Although both are good actors, I had never seen this caliber of performance from either one of them. Their true acting ability came shining through with this material. Being a big fan, it hurt me to the core to watch it , but the writers did an excellent job telling this story. SO EMOTIONAL I hope to see these two characters back together soon…maybe May Sweeps?? Thanks for the article!

It was nice to finally see Michael Easton play some emotional stuff instead of the same old, brooding, cliched performance we normally get from him. John McBain was actually interesting to me for once. Out of the four actors in this storyline, Michael’s performance was the only one that resonated with me emotionally. Kudos to Michael Easton.

Easton was great. I guess Archer was too, I hate the way she cries but I guess thats just me. Williamson was sooo good this week and last.

The break-up scenes with the couples were so intense, they were heartbreaking to watch!

I still feel Michael Easton’s best acting was with Renee Elise Goldsberry.
Now that was the real deal. The were so believable.

They made you believe they were a real couple! That why people love John and Evangeline to this day. It’s kinda sad that the only real emotion that gets shown between John and Natalie is when they are yelling or argueing. When John was with Van he didn’t have to do that their relationship felt like a real one.