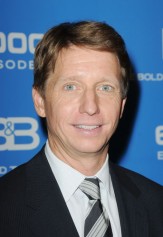 Earlier this week, On-Air On-Soaps caught up with the executive producer and head writer of The Bold and the Beautiful during the series 6000th episode milestone celebration.   Bell, who along with his creative team have won the Daytime Emmy for Outstanding Drama Series for two years running, look to be one of the odds-on favorites  for a nomination going into this year’s competition with their new storytelling process of blurring the lines of reality drama, as they have successfully done with the homeless story and the lung cancer storyline.

Bell gave us his thoughts on the changes made to the new and exciting opening title sequence – fashion runway theme- debuting to audiences on February 21st, where his story focus is going to be as we move out of winter and into the beginning of Spring,  and his success with socially relevant topics in the new B&B way of storytelling on soaps.   Here’s our “quickie” chat with Brad!

So what did you think of the new opening?  Is everything you had set out for it to be? And, how did the whole concept come about?

BRAD: I love it and we are going to be tweaking it before we air it.  It is high-def and computer generated.  We were working with CBS Digital and saw their Dancing with the Stars opening, and I got sick of looking at the current one, which I like, but it has been six and half years!  And with this renewal from CBS, we really wanted to celebrate and say, “We are not on our way out.  We are reinventing ourselves.”  We take the audience’s time as very valuable and very seriously.  So instead of looking at the same thing everyday that is mind-numbing, we thought, why not make it a little more interesting!

Are we going to continue to see B&B blur the lines of reality and daytime drama…as you have done with the homeless storyline and now with the lung cancer story?  Will a new social issue be presented on the series every quarter of the year?

BRAD: I would not say we would do a social issue every quarter, but it is something we are going to continue doing, which is this style of keeping our characters in character and bringing in real people.  It’s like a hybrid of reality and real daytime drama.  That is our technique, and we are going to continue it subtly.  We understand our primary purpose is to entertain, but if we can sneak in a little information and education on important topics that seem to fit organically within the show, we are going to do it.

The 6000th episode that aired this week… are you very, very proud of it?

What can fans of B&B look forward to as we move into spring?

BRAD: I am very excited about the Spencer family right now.  I think Amber with her n’er-do-well mother, Tawny, are bringing that life and energy and humor and plot that comes with these characters.  I am excited about seeing her interact with Liam.  I think they are going to be a dynamic duo as the plot unravels.  Also, we have Jacqui MacInnes Wood back and she is going to have her eyes on Bill Spencer.  So Heather Tom’s “Katie” is going to have a rival!  I feel very confident handing Heather the ball, because she delivers.  It’s cool, because the Spencer family is now part of the fabric of the show.  Don Diamont has done such a great job and they will all be something to watch in the coming months.

Will you continue to tell Stephanie’s lung cancer story?

BRAD: We have to continue to tell the lung cancer story with Stephanie, because Kathryn Joosten calls me and pesters me all the time! (Laughs) She is an amazing advocate for awareness for lung cancer.  We are committed to Stephanie’s cancer, and doing as honest and a real a portrayal as we can.

DAYS February Love Promo – What couple are you rooting for?

Well,well, Brad Bell gives out some tidbits of what the show has comming up this spring. What caught my eye was Dollar Bill and Steffy. Brad had made a believer out of me that he has no respect for children/women/ or families. This no-writer made his character of Brooke a career bed hopping Forrester slut with a couple of son in laws and plenty of baby mama drama to boot and now trying to make her into a Saint. Not before having her hike her leg up and screwing her teenage daughter’s ex-boyfriend, against the wall like a $2.00 whore.… Read more »

Wow! It sounds like you’re really hooked on the show. It’s definitely the show you love to hate. What fun would it be to watch a show where you agreed with everything?

Brad Bell, I got to be fair. You are trying some what to take the show in a more positive direction. Stephanie and Nick’s lung cases were Real eye opener for a lot of people. They both are on point with their action of how illness effect the entire family. The homeless needed to be address but just giving Dayzee the spotlight make it look kind of pointless when there is so many other people that are still in need of help. Then to get rid of Marcus so that you can hook up Thomas and Dayzee turn me off.… Read more »

I disagree with you about Dayzee and Marcus. What you don’t realize is that Bell is doing Dayzee’s portrayer, Kristolyn Lloyd, a huge complement. He’s positioning her into a classic love triangle with Thomas and Marcus. Bell is trying to integrate Dayzee into the fabric of the show by having her involved with two Forrester men. Triangles are what make soap characters interesting. As for Marcus, the actor who portrays him, Texas Battle, like the actress who portrays Steffy, has side projects outside B&B, like feature films and takes breaks from the show. Bell incorporates these breaks into the show.

As an African-American woman, I get what the previous poster is saying. It’s great to see relationships irregardless of color, but that is not the real world. We also want to see an honest depiction of Black on Black love, which is rare in Daytime. And the scenes beween Thomas & Dayzee looked forced. There is no chemistry between the two. Now Amber & Marcus; there is definitely chemistry between those two! If Bell & the other writers really want to show scandal & punch to this storyline, let the baby turn out to be Marcus’ & then reveal a… Read more »

So Steffy is back and has not grown up yet. Steffy is written to be such trash. If Steffy is supposed to be exciting and daring, she is coming across as trashy, immature and nutty. Why not give her a man closer to her level of immaturity? Steffy is fits in the teen line with Liam, Hope and Oliver.

Why call Steffy trashy when every since Brooke hooked up with Ridge that’s all the show has been about, Brooke do the entire Forrester family and the Logan girls sex romps.

Brooke was a grown woman when she hiked her leg up to screw during her daughter’s Graduation. If you want to call someone trashy, be sure to include Donna/Katye/Dollar Bill/Ridge/Owen/Nick/ and the rest of the crew who think it’s all right to have sex on the job. I would like to see some good Fashion Shows.