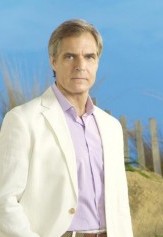 On-Air On-Soaps caught up with some of the dazzling stars of Revenge, and the executive behind the scenes, to get some inside scoops of what is to come, how they like working with each other, why the series has become such a runaway hit, their thoughts on daytime soaps, and of course, some dishy and fun tidbits!  These steamy stars truly know how to show us … The art of revenge!

Today, our chitchat with Henry Czerny who plays Conrad Grayson, whose rocky marriage to Victoria will certainly be even more tested in upcoming episodes!  Henry payed homage to the daytime soaps, talked about his amazing co-star Madeleine Stowe (Victoria) and gave us an insight into the character he plays.

Why do you think people are responding to Revenge?

HENRY: I think people respond to Revenge for a myriad of reasons, and it’s hard to contemplate that there is just one.  First of all, I think the writing has style and substance with its style, and I think those two elements together always make it intriguing.  I think the execution of the scripts is terrific.  I am not talking about the acting, but the technical side of things.  We have well-built sets and the costumes are very well taken care of.  It matters a great deal.  Also, the daytime soaps have been phased out, so there is a huge audience there who want that genre to be back and in full force.

How is it working with Madeleine Stowe?

HENRY: The scenes with Madeleine Stowe are incredibly rewarding to do because of the way they are written and what we expect to be explored and shared within those scenes.  They are very challenging and very rewarding at the same time.

What is the hardest part of playing Conrad?

HENRY: The hardest part for me is to talk to the people who are Conrad.  And, if we go one way or another with Conrad, then we lose the people that we are talking to, if we want to talk to those people.  Especially, if we want to talk to the Conrad’s out there and go, “What is going on with you?  How are you processing this stuff?”  If he is too much one way or the other, than you lose that interest in the character, cause then people can simply say, “That is not me.”  It’s to put people in his skin, which is very difficult to do in this genre and the most challenging.

Do you and Madeleine laugh when they yell, “cut”, especially when the two of you play the very unhappy couple, The Graysons?

HENRY: Sometimes we will laugh after a scene, as any couple might do the next day after they just had a huge fight.  They might look at each other and go, “What the hell were we at each other’s throats about yesterday?”  But Madeleine and Henry are never at each other;s throats.  But drumming that up before we shoot a scene, I notice there will be a different energy with Madeleine that I have with the other characters of course, because there is so much at stake for Conrad and Victoria.  And that has to be present in any of the scenes we shoot.

What do you think Madeleine would say about you?

You had mentioned the daytime soap audience losing their daily dramas in the afternoon.  Do you think the cancellation of some of them has helped Revenge become the success it is?

HENRY: First of all, my wife loves soaps.  She has been going through withdrawal losing so many of them, and of course, she loves to watch Revenge.  I think she is a part of a large audience who is missing a large part of that genre.  And needless to say, Revenge is that genre with a twist and with some deeper resonating themes.  It’s a darker soap.

Can you preview anything coming up?

HENRY:  I can only tell you, it gets more and more intriguing, and more and more impossible to not watch and to figure out.  But you know what?  If you looked back at your life ten years ago and imagined what you saw coming and what actually came, you would be shocked.  That is what Revenge is about.  It’s shocking what shows up in a day!

An all-new episode of Revenge airs Wednesday, April 18th (10PMEST) on ABC called “Doubt”  Here is the lowdown: Daniel’s imprisonment sends Victoria to depths that no one thought possible, as the surprise return of a past love (James Purefoy as Dominik Wright) provides a destructive but welcome distraction from her family’s struggles. Meanwhile, Jack’s search for Amanda grows more desperate as he comes under suspicion for murder, on “Revenge.”

Glad to see that he recognizes the withdrawal that the fans are going through over the loss of their soaps….