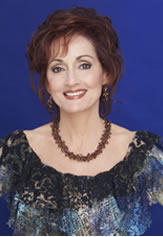 As fans know, Daytime Emmy winner Robin Strasser (Dorian Cramer Lord) is headed back to Llanview and One Life to Live when the series returns via Prospect Park’s online reboot of the series this spring.

Strasser, who has had a rollercoaster of a ride past with ABC’s One Life (where she was written-out on June 23rd of 2011, and was not there for the ending, and who was not originally asked to join Prospect Park’s One Life reboot during the production companies first attempt at reviving the show) spoke to TV Guide Magazine where she revealed she is enthusiastic these days with Prospect Park’s plans for the series citing, “It’s a different energy now.”

Strasser also talks about: her thoughts on how she was written off the original OLTL, how her deal came about with Prospect Park, if she knows the storyline that is being written for now, and she even offered up a bit of insecurity after all the behind-the-scenes shake-ups she endured, but always noting that she is always dedicated to her performances.  Here is an excerpt!

Strasser on what she could be scared of now after all she has been through: “Getting what I asked for, what I prayed for. Mixed up in all the joy and the celebration is the fear of not living up to this. Do I deserve this? Could it be taken away? To love something so much and let it go and then have it suddenly come back is an overwhelming thing. My respect for this business is built on the premise that every episode is opening night, though I may have driven people crazy with that concept. Every episode, every scene matters deeply. At the start of each work day, I always think, “If this is the last performance I ever give, let it be a great one!” What can I say? I’m a drama queen.”

So what do you think about Robin’s statement? It was tough road for her and her fans not having Dorian around!

Jack Wagner Back To General Hospital And Already Taping Scenes!

Glad Dorian is back with so many others, I can’t wait for April to get here to start watching OLTL and AMC again!!!

Thrilled for Robin and the fans and actors and employees.

How long are the contracts for?

Was thinking the same thing!

Missed you Dorian (and Ms. Strasser). Welcome home to Llanview, PA. Can’t wait to see what Dorian has been up to.

This is a real blessing!

Dorian, back on screen – be still my heart!

It wouldn’t be OLTL without Robin and Erika. Dorian and Viki light up that screen with their humorous “digs”. 😉

I can’t even express how Happy I am that Robin Strasser is coming back as Dorian Lord for theOLTL reboot!
We missed her terribly at the end of the ABC OLTL and look forward to seeing the Cramer women again!!

She belongs in Llanview!!! So happy!

Her soap career goes back further than anyone still working, she is an institution and a darn good actress.

PP will prove that Frank was SO SO SO wrong to ever let Robin get away. Erika and Robin are the backbone of OLTL. I also agree with other post as a sign of good faith take down R.I.P. next to AMC and OLTL.

Shortly after she left OLTL, Robin had been Tweeting, holding her head up and moving forward. I knew, if the opportunity presented itself she’d bring Dorian back! Robin loves Dorian and portrays her fabulously! Some of my favorite OLTL scenes always include Dorian & Viki!! They play off each other so well. Erika & Robin are both class acts and I don’t think Robin’s a “drama queen”, but a talented actress who had lost something she loved in an unfortunate way. I’m so excited for this revival and to have so many, especially Bo & Nora, back! This is a… Read more »

Well put!
Robin is one of my favorites!
Can’t wait!

I am over the moon to know Dorian and Robin will be back in Llanview for our viewing pleasure! 🙂
I never had a problem with anything she tweeted; she has every right to her feelings and opinion.

It doesn’t matter to me when you take the RIP off of AMC and OLTL, now or wait until they ‘air’.

I love Robin Strasser as Dorian Lord! She is pure perfection as the Diva! And her interactions with David Vickers are pure magic!