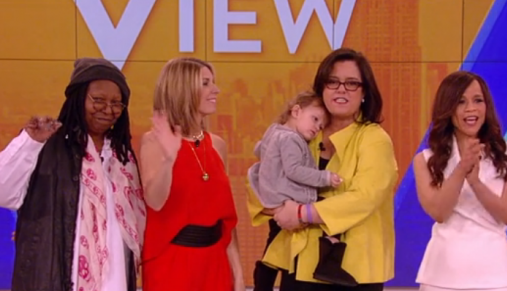 The moment came at the end of today’s episode when O’Donnell holding her daughter said, “I just wanted to say thank you to all the cast here and the crew — and mostly to Barbara Walters, who has always looked out for me and my life and career and is an amazing woman. We had lunch yesterday and she sends her love, and I want to thank her for making this show and letting me be on it  — twice!”

In addition, O’Donnell joked and warned she’d come back to do an occasional crafting segment, and plugged her upcoming Sunday HBO comedy special. As confetti dropped from the top of the studi0, the audience chanted, “Rosie! Rosie!”

Also on the episode today was Saturday Night Live cast member, Keenan Thompson who joined the ladies to promote this weekend’s upcoming SNL 40th anniversary special.  He became the first person to interview O’Donnell on her departure and asked her, “Why are you leaving?”

Watch the final moment’s from today’s episode of The View when Rosie says goodbye again! Then, share your thoughts below!

Never watch the show – or abc – except gh.

Hmmmm. I’m sure there’s a lot going on behind the scenes at “The View” and I honestly don’t blame her for bailing. (For months, there have been reports/rumors of the new micro-management team trying to oust everyone but Nichole Wallace — sp??) Personally, Rosie evokes alternating reactions. She seems either volatile or fragile most times, and even when she’s on her best behavior, it feels as though she’s biting her tongue and will explode at any provocation. And during her less guarded moments, she can be quite affable and clever. However, I hope she gets her personal / family issues… Read more »

This show is a trainwreck… needs to be canceled!!

I’VE ALWAYS LOVED ROSIE, AND STILL DO. I’M SO SORRY THAT SHE’S LEAVING AGAIN, BUT I DO UNDERSTAND THAT HER CHILDREN COMES FIRST AND SHE NEEDS TO TAKE CARE OF HERSELF. I DO HOPE THAT SHE DOESN’T MARRY ANY ONE ANY MORE, SHE’S PERFECT JUST THE WAY THAT SHE IS. I WISH HER AND HER CHILDREN LOTS OF LOVE WITH EACH OTHER AS WE LOVE ROSIE AND I DON’T CARE WHAT ANYONE THINGS. SHE’S ONE OF MY FIVE FAVORITES. GOD BLESS HER AND HER FAMILY. HOPE TO SEE HER AGAIN. MARY DITANNA PENDRAK

I wish it was goodbye to The View not just Rosie.

How many kids does she have? She must adopt one every year.

Kudos to Rosie for a much classier exit this time. Her video statement was much more mature and balanced than she seemed just a few years ago. Wish her the best with her heath and family.

PULL THE PLUG ON THIS TRAIN WRECK SHOW!!!!

“…Rosie replied,“I got a lot of stress, hon. ” In a perfect world… who wouldn’t want her livelihood? luxury to come and go ? how difficult is it to do a talk show ? when all the producers of… did for… and she parlayed her mind to panel with and share current events for and with other likeminded, differing values and opportunity to showcase all people of color Her personal life has always been in upheaval…. her marriages and relationships… I do value her being a mother… that’s her first priority that being said… to shut down her career ?… Read more »

Wow. Didn’t know about the heart attack. I hope she does better and doesn’t relapse.

Why the hell did she ever say hello!

the low number of reactions to this story – shows that no one cares about this soap opera.

I’ll take OLTL and AMC anyday as a replacement.

Her ending on The View was so phoney. Not a word about leaving all week, and then only barely mentioned in the last show. Clearly, she hated being there and it had nothing to do with her health or family.