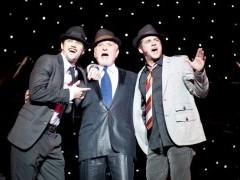 Our little spies were out in full force last night in New York City for the 6th Annual ABC Daytime/SOAPnet  Broadway Cares/Equity Fights AIDS benefit at Town Hall. Taking center stage where stars from All My Children, One Life to Live, and General Hospital who sang and danced on Broadway for one night only in support of  the cause.  So, here were some of the huge highlights!  In a skit titled, There’s No Place Like Home written by OLTL publicist, Lauri Hogan, a lucky fan, Melanie Butler, got the soap loving opportunity of a lifetime.   Melanie bid on the auction item to perform in the skit.  Reportedly, she rehearsed on Saturday and knew her lines  very well going into Sunday’s Broadway performance.  Then the gal was the envy of every woman in America when she did the skit with OLTL’s David Gregory (Ford), GH’s Brandon Barash (Johnny) and AMC’s Adam Mayfield (Scott).  In the Wizard of Oz send-up, Gregory had no heart, Mayfield had no brains, and Barash had no courage.  The clever skit even found a way to work in Stacy Moraso’s boots, when Melanie put them on during her trip through Soap Opera Oz!  And yes, Gregory re-enacted the famous “bucket scene” from One Life in Oz too!

GH’s Tony Geary (Luke), Nathan Parsons (Ethan) and Brandon Barash performed  Dirty Rotten Scoundrels. Geary also performed solo, American Dream from Miss Saigon.  OLTL’s Jason Tam (Markko) brought down the house with Too Darn Hot. Kassie DePaiva (Blair, OLTL) who was celebrating her birthday performed a number from City of Angels. GH’s Jonathan Jackson (Lucky) delivered a stirring rendition of Music of the Night from Phantom of the Opera. The View’s Sherry Shepherd made Mary Proud with her new version of Tina Turner’s Proud Mary. The host with the most, Cameron Mathison (Ryan, AMC)  this year had a special co-host!  That distinction went to Lee Cummings,  who won the opportunity via the show’s auction to be Cam’s hosting partner.

Bree Williamson and her best gal pal, former OLTL star Beth Ann Bonner performed a musical duet, and it really gave the audience a chance to see a different side of the talents of a woman who has played Jess/Tess/Bess and now a teenage Jessica.  David Gregory also surprised.  He has quite the singing voice!  AMC’s Bobbie Eakes (Krystle) performed a clever number from Young Frankenstein, and worked in a name familiar to Pine Valley residents, “David Haywardstein”. We will more on the performances and the benefit tomorrow at On-Air On-Soaps!

1.6 million dollars has been raised by the ABC Daytime lineup in over six years to help this most important cause.  For more on Broadway Cares/Equity Fights AIDS, check out their website!

The show was so amazing this year! Everyone really amazed me with their talents you don’t get to see on daytime tv! I also wanted to say that the young lady, Melanie, who did the skit was so fun to watch. If she can do drama as easily as acting in front of all those people, she would make a great addition to one of the shows! Also, Natalie Hall (Colby) was so impressive! She should audition for a full Broadway show!

Never let it be said that Daytime television isn’t filled with insanely talented people! The performances were amazing, but I was particularly blown away by Jonathan Jackson. I knew he could sing, but I had no idea he could sing like THAT. My jaw is still on the floor!