On today’s broadcast of the CBS afternoon series, The Talk, the ladies welcome Y&R icon, Melody Thomas Scott, who this week celebrates her incredible 40th anniversary with the show as Nikki Newman.

During her segment, Melody chats on Wednesday’s upcoming standalone episode where Nikki is in jail reflecting on her life.  Wednesday is also the exact date of Thomas Scott’s 40th anniversary with the CBS Daytime drama series.

During the segment Melody fills the ladies in on the “All About Nikki” episode, as she relates:  “I was so thrilled that they did this. It’s truly, really the life of Nikki in the entirety of the episode. It’s all about Nikki. And she’s in jail. She’s writing a letter to her grandchildren so that she can explain who she really is, how she got to where she is.  I have to narrate it, I’ve got a voice-over, a long voice-over. And then, as I’m thinking about all these different times in my life, I can’t believe I’m referring to me as her, her life, then we see the flashbacks. And for the longtime viewers, even current viewers, it is such a trip down memory lane. I mean, you are on that train and you’re not getting off…all of the clips have not been seen since they were first aired.” 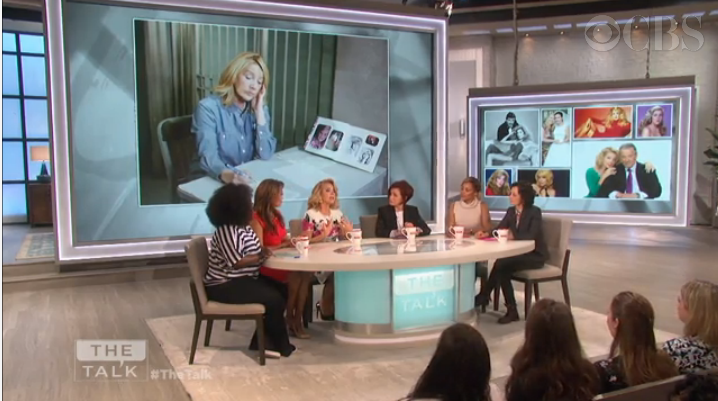 In addition, Melody addresses the passing of her longtime co-star and friend, Kristoff St. John relating:  “I adored him. We all adored him. There was something very unique and magical about him. He would just draw you into his wonderful world. And all of his bear hugs, I can’t believe I’ll never get a bear hug. Going to any kind of event, any party, the first thing I said when I got there was ‘Where’s Kristoff?’ I want to find Kristoff, I want to be with him, I want to be in his air space. Because that’s the kind of guy he was, and I think that came through on camera. I think everybody sensed that, I mean everybody adored him.”

So, will you be checking out Melody on today’s episode of The Talk (2PMEST and 1PM PST) today? Comment below.

I cannot wait to see the special episode and to also see her on The Talk today. And, am also hoping that the new promotional shoot that the cast did comes out soon, because it’s been many years since a quality shoot was put out!

Congratulations to this talented lady!

Melody, beware of that crazy one, Cheryl Underwood! UGG!

OMG, can’t stand that woman. When a man comes on, she’s all over him, disgusting.
I saw The Talk and Melody was absolutely beautiful. I don’t understand why she looks so downtrodden on Y&R, and that’s most of the time, not just when in crisis, as what’s going on now.

When Steve Burton signed with Y&R and was on the Talk, I believe thats when the #metoo movement should have begun! Underwood attacked Burton, dry humping him! It was gross and I felt bad for him.

I remember back when Leah Remini was on the show Donny Osmond was a guest. During the interview all the hosts were sitting on either side of him on the couch. Leah was sitting next to him. Or I should say she was practically laying all over him. She had her head on his shoulder, and she was rubbing his chest the whole time. Not long after that, the couch was gone and so was Leah. I was never a fan of the show. I only watch when someone or something that appeals to me is on. I don’t know… Read more »

I wonder if Nikki will even mention sister Casey Reed?

WOW! 40 years, that is looong time, a lifetime!
I haven’t lived that long..

Congratulations Beautiful Melody Thank you the years watching flew by. On a personal note thank you showing how you deal with my MS. God bless many more years portraying Nikki❤

It was a great interview She looked beautiful as ever.

Did not see the interview but finally caught up today with THE episode! What a fantastic tribute to her role as Nikki Reed Newman! Loved the CLASSIC flashbacks– a time when the show was a great, can’t-miss program… the lighting, the romance, the MUSIC!, it was fantastic.

I agree with you 100% Ron, oh how I miss those days so the episode was the best in years…LOVED the music too and I miss it so…I already watched the episode twice…

Hey Kevin– so those were the days! I had one high school senior son home ill for the week and he watched the show every day with me. We watched the Nikki stand-alone a day later from its broadcast and my son said, “Those scenes are so much better than what we watched all week!”

Ron, I am glad there are people like you and I that understand what Y&R was all about and how great it was and even you son knows from watching and that says a lot, THANKS for sharing Ron…By the way, I hope your son is back 100% feeling better…

ALL I have to truly say… of all the grand dames.. who have solidified and impacted this genre with their presence. Nikki , has gained entrance to the hallowed soap annuls. for me… she is the most disappointing character to have never fully WOMANHOOD.

the list is endless… Nikki , never amounted to taking charge. She, in the end kowtowed.. to Victor Newman. end of story. what’s their to cheer her on for ?