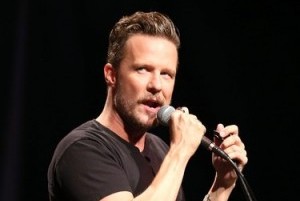 Nashies were not too happy when they learned that Will Chase was not coming along for the ride as a series regular when Nashville debuted in its new home for its fifth season on CMT.  Chase’s country music singin’ alter ego Luke Wheeler was last seen trying to help his musical artist signed to his label, Will Lexington (Chris Carmack), fight homophobia in the music industry.

Now comes word via Chris Carmack and Chase themselves that Will is making a brief return for the start of season five of Nashville.  Carmack tweeted a picture of himself with his buddy, Will stating “It’s always a good day opening up for Luke Wheeler! @WillChaseMe @NashvilleCMT”

Meanwhile, Chase tweeted, “Felt good to put the boots back on and always great to see YOU brother! @RealCarmack @NashvilleCMT #WheelsUp”

Coming up, Will Chase can be seen as series regular in ABC’s upcoming midseason series, Time After Time.

So, are you excited to know there will be a bit of Luke Wheeler coming your way in season five of Nashville? Comment below!

"Housewives" In Genoa City: Erika Girardi To Team Up With Eileen Davidson In Upcoming Episode Of Y&R!

Scott Clifton Reveals Theory On Why The Bold and The Beautiful's Love Triangles Are So Successful!

Kinda already knew it. They said he’d be back to wrap up his story. And, as I’ve stated before, I liked Luke. A lot. So, happy to see him…bad decision to cut his character.

So happy he will be back even if it is a short stay. Loved his character and the story he had with his son.
Trying to be patient waiting for Nashville to come back.

Good to hear, he deserved at least that!

GOOD NEWS…UTILIZE ESTABLISHED CHARACTERS AND DO NOT KEEP BRINGING ON NEW PEOPLE..

They’re not utilizing him..they didn’t sign him on to the new show…he’s just wrapping up his story.