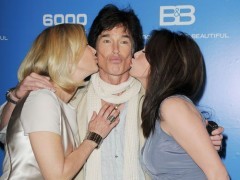 A new logo was unveiled, a new series opening sequence was unveiled, and the coolest design of cupcakes every seen at any party were just a few of the fun gems that The Bold and the Beautiful had in store for its cast, invited casts, and industry professionals when they celebrated their 6,000 episode milestone this past Monday on the set of Stage 31 at CBS, the home of B&B.

Executive Producer and head writer, Brad Bell kicked off the momentous event by addressing the crowd and reviewing the accomplishments of the series, especially its current focus on important social issues of the day that have been at the forefront of the soap over the last several years. Bell then introduced the entire cast, one by one, by their tenure on the show starting with, as Bell calls them, “The Fab Four”. And with that Susan Flannery (Stephanie), John McCook (Eric Forrester), Ronn Moss (Ridge Forrester), and Katherine Kelly Lang (Brooke) took to the stage, and then the remainder of the cast each followed.

Los Angles city councilman, Paul Krekorian, was on hand to acknowledge Brad Bell and The Bold and the Beautiful team on the 6000th episode landmark, and its decision to tell a part of their lung cancer storyline on this special occasion and its continued efforts to bring this social issue to the world.  Krekorian stated to Brad Bell and those in attendance, “I am so happy to be here today with the most watched daytime drama on planet earth! And what a great moment it is for you, the show, and the city of Los Angeles. And, how great it was of you to use this opportunity to highlight the on-going struggle we have in this society with lung cancer.

Krekorian also recognized one of the special guest-stars of the 6000th episode, Desperate Housewives, Kathryn Joosten (who was present) for her ongoing efforts to spread the word about lung cancer and its prevention and its treatment. Joosten was then presented with a certificate of recognition from the City Council of Los Angeles. Next, Brad Bell was acknowledged with a special certificate for all of his creative achievements and what he has done for city of L.A.

When the new opening sequence was unveiled, using the most modern of technology in this digital age we live, it enhanced the B&B experience ten-fold!  All of us in the room, including On-Air On-Soaps thought it was one of the most exciting new openings of a daytime drama we have seen in a long time. It is set to hit audiences’ television screens on 2-21-2011.

Now, view our photo gallery below of the fun-filled morning with the cast of B&B! Remember to view the slideshow, you can either watch it play, or you can hit the NEXT GROUP icon to the right of the + symbol to see more of the gallery.

UPDATE: A Mark Lawson "Imposter" posted comments in response to journo that OLTL was recently homophobic in its humor!