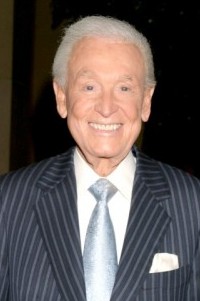 You got to love the iconic Bob Barker, the former long time host of the hit game show The Price Is Right!  The long time animal activist is getting a chance to bring his cause to the soaps and more specifically CBS Daytime’s The Bold and the Beautiful!

Barker begins his stint on the April 30th episode of B&B, and will be part of a three-episode story arc revolving around an animal rescue, which will pull at the heartstrings for animal lovers everywhere. (Barker had made one other appearance on B&B previously back in 2002)

In story, according to The Wrap, Barker, the long-time animal rights supporter is interviewed by Liam Spencer (Scott Clifton) for a feature article on the issues surrounding control of the pet population. “Animals can’t speak for themselves, they depend on us to protect them,” Barker explains during the scene.  Barker encourages Liam to visit the local animal shelter, which he does, with Hope Logan (Kim Matula).  They are greeted there by Brandon McMillan (Animal Trainer and Host of the CBS Saturday Morning’s Lucky Dog).  Nice synergy CBS!

The executive producer and head writer of The Bold and the Beautiful, Brad Bell offered up, “In keeping with our commitment to spotlight real-life Los Angeles heroes, we are focusing this story arc on the work of animal care and rescue in our city’s shelters, Bob is a highly respected advocate for animal rights and is an instrumental player in the storyline.”

What do you think about B&B tackling the cause of animal rescue and what goes on in animal shelters?  Do you think this story will propel Liam and Hope closer together than ever? Let us know!

Not interested. I’m for animal rights, but Bob is too militant in his beliefs.

Curious. What do you consider too militant about animal rights?

I said Bob I too militant in his beliefs. Not every dog needs to be neutered. People who show dogs and get dogs from breeders are animal lovers and take good care of their dogs. Bob supported a bill in CA that wanted to make it illegal to have unneutered dogs. That meant that people with unneutered couldn’t travel through CA? People couldn’t hold dog shows in CA?

I’m all for animal rights. I know the average pet owner should not be breeding and should neuter their pet. I support that, but Bob has been too hardcore in some of his beliefs and that is what I have a problem with.

Thanks for replying. I didn’t know Bob was so extreme. But I figure if they did make neutering mandatory, like all laws, there are usually exceptions…in this case legitimate ( not puppy mill) breeders, or show dogs. In the meantime, I do admire what he has done in the main. Too many animals are treated pretty badly everyday and do need spokespeople with his passion.

Sounds great. Love it when real life and the soaps intersect in a meaningful way.

A friend of mine made an excellent suggestion: he should spay and neuter everyone at Forrester Creations.

Well maybe while Liam & Hope are there visiting they can have the procedure. I have never been soooo sick of two characters since Ridge & Brooke.

I for animal rights, but CBS is only using Bob Barker ploy to get TPIR viewers to watch B&B.

Don’t watch that soap…and the man was accused several times of workplace sexual harassment. Sigh…don’t they have a more vast talent pool to dive in to???

I think this will be interesting. I am all for animal rescue. Most of the cats & dogs I have had have been rescued. In fact I have a cat now that was a rescue. Hope that Liam & Hope might get closer while at the shelter.

Thank you bold and beautiful and bob barker. What a brilliant storyline. Heartwarming . Adopt a shelter pet!

We in Australia are just in the midst of thes episodes. This is a very significant problem worldwide,so let’s not dissect this too much and just be grateful that this issue of so many unwanted and abused animals is being addressed on an international scale on one of the worlds most long standing and popular TV shows.It is heart warming. This is such a clever way of campaigning and doesn’t cost animal welfare organizations any advertising fees. The cost of this promotion would be very high for a group like animals Australia or RSPCA. Thank you B&B.