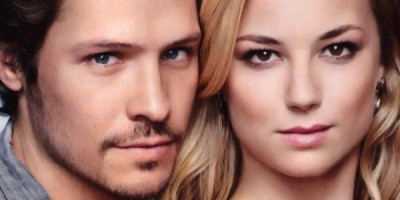 Sunday night it all comes down to the final hour after four seasons of the primetime drama, Revenge (10PM ET/9PMCT).

The soapy drama which has been canceled by ABC, will come to its conclusion and clearly is set to go out with a bang.  The final episode is entitled “Two Graves” and showrunner Sunil Nayar has promised that by the end of tomorrow night’s broadcast at least two characters will be in graves.  But now its time to figure out, just who they will be!

What we do know … David Clarke (James Tupper) is dying of lymphoma- brain cancer – and told Amanda (Emily VanCamp) he has less than six months to live!  In the series finale promo that has been playing all across digital platforms and on ABC, viewers see what looks to be a final showdown between Amanda and Victoria (Madeleine Stowe), who we found is actually alive and well and did not commit suicide afterall.

But, in the promo there is that gut-wrenching moment where we see Amanda at Jack’s (Nick Wechsler) hospital bedside, where it looks like he is not doing well at all! Then, there is another clip where Amanda is lying in a pool of blood on the floor.

Nayar also previewed that Christa B. Allen is on her way back for the final episode as Charlotte who divulges some vital information during her return.   We also have revenge-filled Margaux (Karine Vanasse), who when last seen was in prison and then there is Louise (Elena Satine)!  And what about Nolan (Gabriel Mann)?  Can he finally find happiness, or will he go down to hell with Amanda?

The showrunner told E Online on the final outcome of the characters of Revenge:  “There’s no leaving this battlefield unscarred, both physically and mentally, so I think that there will be, the audience will be promised some degrees of happiness for some people, but there’s never a version of it that isn’t also just tinged with the darkness of the journey. Every single character got a resolution that is both emotionally satisfying, story-wise satisfying, and often times really surprising.”

As for two graves, could there be more than two people put six feet under?  “I can promise you that at least two people will be in graves by the end,” Nayar says.  “And yes, there could be more.  You never know, there’s  a lot of peril. There’s a two-grave minimum.”

OK Revengers for the final time, weigh-in! Which two characters do you think will end up in the two graves in the season finale? Comment below!

REVENGE Post-Mortem: Two Dead And Six Feet Under, One Wedding & A Final Twist!

Alison Sweeney Previews Her DAYS Return: "I Think I Can Say That It's Definitely An Emotional Homecoming …"

Two Graves = 0ne for Amanda and one for Victoria …
That would be unforgettable..

Revenge has been my favourite show since it started. I am 68 and a daytime soap fan too. I am very saddened to see Revenge cancelled. Some of the best acting in many years. I will miss it!

I’m sure it will be a terrific show but it’ll be a loss…as all shows are that you become invested in…characters that take on a life of their own…same thing as reading the last page of a good book. These non real entities become real for a limited time…and there’s a winding down…sigh….

I could guess who will die, but thers been so many down for the count on this show there’s not many left to choose from. Sunday is here…

I think David will die and the final scene will be Faux-manda standing at her own grave ready to get revenge on the real Amanda for not holding on to her after the boat explosion in season 2.

I’m a a fan of both shows and would have really felt the loss of NASHVILLE. Apples to oranges. REVENGE had a point…for Amanda Clarke to exact revenge. She did. In the midst, almost everyone she touched, good and bad, fell victim to her life. Yes, they could have gone in and taken it in a different direction. I, for one, would have watched with the hope that David didn’t die. It might have been poetic…but it left me flat…just really wanted the two to FINALLY have time… But I digress…Nashville doesn’t have an endpoint. They can continue to weave… Read more »

After watching, they better be giving Nolan a spin off, with the crazy redhead!